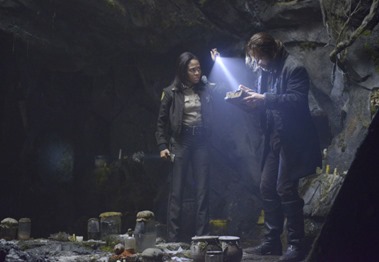 Sleepy Hollow (Fox, Mondays, 9/8C) is a fusion of a lot of things we’ve seen before – cop show, conspiracy thriller, supernatural/horror show – but is a new riff on all them. Fatally wounded Revolutionary War soldier Ichabod Crane finds himself regaining consciousness in the 21st Century along with a supernatural terror. Not only does he have to face this terror, he has to convince everyone (starting with the police) that he’s not just another crazy guy in a costume. Fortunately, he finds an ally in a police officer who had been planning to leave Sleepy Hollow in her past to join the FBI.

Fox’s tag for Sleepy Hollow reads, ‘After being resurrected and pulled two and a half centuries through time, ICHABOD CRANE (Tom Mison) finds himself in modern-day Sleepy Hollow, where he quickly realizes that evil has awoken with him. When Sheriff August Corbin (guest star Clancy Brown) is killed by the infamous Headless Horseman, Ichabod forms an unlikely bond with Detective ABBIE MILLS (Nicole Beharie), a young cop who has her own childhood supernatural experiences. Together, the two embark on a mission to stop evil and uncover mysteries dating back to the founding of our country. Captain FRANK IRVING (Orlando Jones) hesitates to believe Ichabod’s tales of supernatural evil. But when Ichabod’s former wife, KATRINA (Katia Winter), provides clues about impending evil, they all begin to realize that this town is anything but sleepy in the all-new “Pilot” series premiere episode of SLEEPY HOLLOW (caps theirs).

The teaser for the Sleepy Hollow premiere shows us Ichabod Crane, fighting the good fight when a masked British soldier wielding an axe attacks him – arising after being dealt a seemingly fatal wound. Wounded, Crane takes his head off with his sword before fading into oblivion. He awakens in a cave and stumbles out to find a road and, while he’s marveling at its unknown constitution, is nearly run over by an eighteen-wheeler – and a car runs off the road to avoid him. It stops behind a sign which a camera move reveals to be Sleepy Hollow. 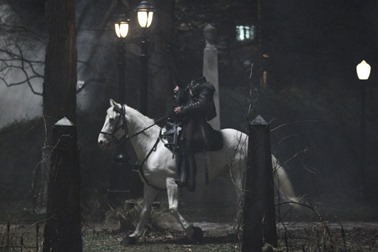 Sleepy Hollow, population 144,000 ( a very biblical number) is a town that seems to be in the middle of mysteries, which Sheriff August Corbin points out to his partner and protégé, Abbie Mills – alluding to some reason she should be particularly interested. Their dinner is interrupted by a call that takes them to a nearby farm where the headless body of the aforementioned British soldier comes at him with his axe. Corbin shoots him repeatedly to no effect.

Over the next hour strangeness runs rampant: Crane comes in to town; the headless soldier, now on horseback, continues to kill; and Crane is consigned to a mental institution, and we learn how he was saved and wound up here – his wife, Katrina (Katia Winter), is very much involved. George Washington plays a role in Crane’s story; there’s a reason the horseman is in town and the relevant part of Abbie’s past becomes known – which ties into Crane’s story and sets up a conspiracy that apparently transcends time and death.

The script – by Alex Kurtzman, Roberto Orci and Phillip Iscove (with story assist from Len Wiseman) – takes a couple of elements from Nathaniel Hawthorne’s classic short story, adds a bit of Rip Van Winkle and a number of ideas from The Book of Revelations (not the least of which is that the Headless Horseman is Death, one of the Four Horsemen of the Apocalypse). 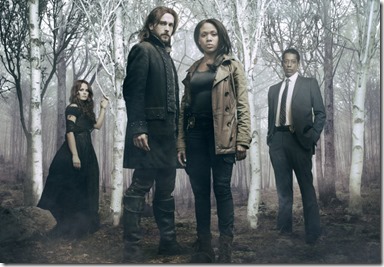 It’s a fast-pace tale that brims over with new takes on some familiar ideas but never quite feels overly stuffed, or like too much of an infodump. The premiere is directed by Wiseman (Underworld, Total Recall), who knows how sell a story. He gives each era a distinct tone and makes the shifts a seamless part of the storytelling. The use of FX is essential to the storytelling and it’s fair to say that their quality is extremely high.

Mison and Beharie work well together and, unusually, Jones plays Captain Frank Irving, a character who is not particularly funny – and not particularly happy about the state of affairs in town, for that matter. His participation is grudging at best and it’s probably just a matter of time before he actually witnesses some supernatural event or another.

In interviews, executive producers Kurtzman and Orci have described the show as being ‘a molecule short of absurdity,’ and that’s a fair assessment of its mix of horror/fantasy and police procedural. That willingness to play outside the box results in a premiere that is great fun.

Photos by Courtesy of Fox