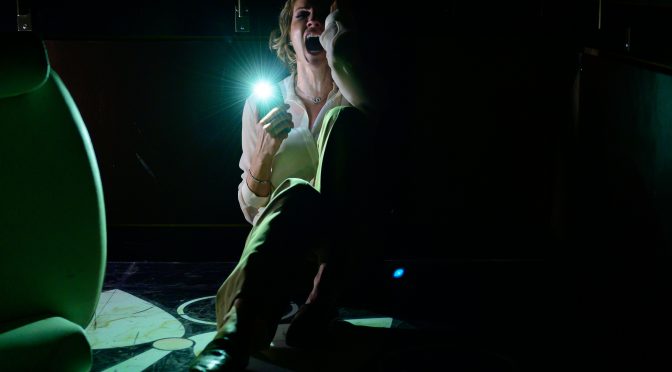 Creepshow is Shudder’s biggest hit to date so it comes as no surprise that Greg Nicotero-produced horror anthology has been renewed for a second 10-episode season. The show’s first season finale airs October 31st.

Based on the format of the Stephen King-George Romero film, Creepshow adapts short works by horror masters like King, Joe Hill, Joe R. Lansdale, Josh Malerman and others. 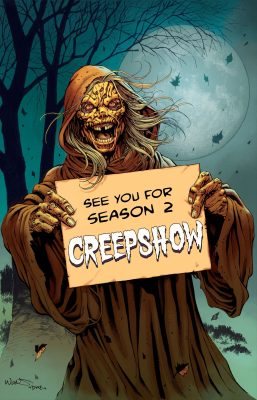 October 30, 2019 – Following a record-setting first season, Shudder — AMC Networks’ premium streaming service for horror, thriller and the supernatural — today announced the season two renewal of its horror anthology series, Creepshow. Executive produced by showrunner Greg Nicotero (?The Walking Dead), Creepshow is based on the iconic 1982 movie written by Stephen King and directed by George A. Romero.

Creepshow, Shudder’s first hour-long scripted series, has been a hit with its members and critics alike. The series is rated 92% Fresh on Rotten Tomatoes and was called one of the “10 best shows on TV right now“ by Paste Magazine. More than 50% of Shudder members watched at least one episode of the series, and the show has also helped drive record growth for the streaming service.

“Creepshow has met every expectation we had for Shudder’s first original scripted series and then some, with record numbers across the board,” said Shudder GM Craig Engler. “Greg Nicotero and his team delivered an amazing show that’s unlike anything else on TV and we’re thrilled and delighted to bring it back for another season.”

“For me, Creepshow has been a true labor of love,” said Nicotero. “To be able to pay tribute to George A. Romero’s visionary project and have the show so embraced by fans everywhere is humbling to this horror kid from Pittsburgh. I couldn’t be more pleased and look forward to continuing the series with more ghoulish delight.”

“Working with Greg Nicotero and Shudder on Creepshow has been a dream come true,” said Stan Spry, executive producer for the series and CEO of the Cartel. “We’re thrilled to carry on the Creepshow legacy with season two.”

The season one finale airs Thursday, October 31, both on demand and on the Shudder TV live-stream at 9:00 pm ET/6:00 pm PT. Shudder is available on all your favorite devices and platforms, including Apple TV Channels.