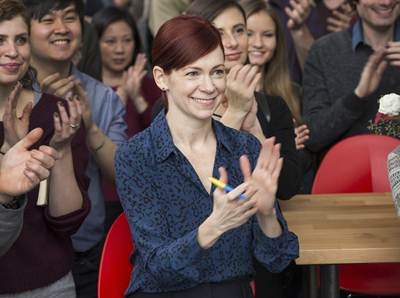 Showtime’s HAPPYish features a lead character who may not quite be happy, but is willing to settle for happy-ish.

To celebrate the series premiere of HAPPYish (Sunday, April 26th, 9:30/8:30C), Showtime is setting up life-sized snow globes in New York City and Los Angeles – where fans can find themselves engulfed in confetti like it’s their own personal parade in their own private happy-ish place.

Series guest star Carrie Preston (above, True Blood, Person of Interest) will be on hand at the New York location for photo ops and interviews.

For those who cannot be there in person, there will be a companion microsite – www.myHAPPYishPlace.com – that will allow fans to create their own photos of their happy-ish place. For more, follow the jump.

What: SHOWTIME will give fans the opportunity to step inside their own “HAPPYish Place,” in the form of a life-size snow globe, where fans will find themselves engulfed with custom confetti. This moment will be recorded in a slow-motion video, which can be shared with friends and followers across multiple platforms.

For fans unable to attend the activation in New York or Los Angeles, a companion microsite (www.myHAPPYishPlace.com) will be available starting on April 22nd, allowing fans to view videos from the event, learn more about the series, and create their very own photo of their “HAPPYish Place” to share across social media platforms.

Between Broadway and 5th Avenue

*At 12:30PM, Emmy winner Carrie Preston (The Good Wife), who guest stars on the series, will be on site for photo opportunities and interviews in the New York location. In HAPPYish, Preston plays Debbie Dubonte, a Senior Account Director at MGT who could “be the mother” of her two new “wunderkind” bosses, and must, like Thom Payne (Coogan), find a way to reinvent herself or lose her job.

Between Farmers Market and Shopping Center

About HAPPYish: Premiering on Sunday, April 26th at 9:30 p.m. ET/PT, HAPPYish stars Oscar® and Golden Globe® nominee Steve Coogan, Kathryn Hahn and Emmy winner and Golden Globe nominee Bradley Whitford. HAPPYish is a comedic, soul-searching examination of our pursuit of happiness and why it continues to be so elusive. Currently in production in New York, HAPPYish also features guest stars Emmy and Tony® Award winner Ellen Barkin, Preston, Molly Price and Andre Royo. Coogan stars as Thom Payne, a 44 year-old man whose world is thrown into disarray when a pair of 25 year-old wunderkind bosses arrive, saying things like “digital,” “social” and “viral.”  Is he in need of a “rebranding,” or does he just have a “low joy ceiling?”  Maybe pursuing happiness is a fool’s errand? Maybe, after 44 years on this ludicrous planet, settling for happyish is the best one can expect. HAPPYish is created, written and executive produced by critically acclaimed author and regular This American Life contributor Shalom Auslander.  Emmy Award nominee Ken Kwapis (He’s Just Not That Into You, A Walk In The Woods) executive produces and directed the pilot. Kwapis’ producing partner Alexandra Beattie serves as co-executive producer under their In Cahoots banner.