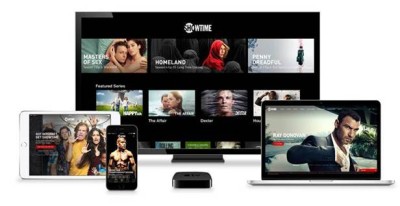 Beginning in early July, Showtime will be offered over the internet as a standalone streaming service. Apple will be its first partner – iPhone®, iPad®, iPod touch® and Apple TV® users will be able to subscribe to Showtime as a stand-alone service on the Showtime app anywhere in the U.S., for one monthly price ($10.99) to view on all Apple devices.

The launch will be timed to coincide with the new seasons of Ray Donovan and Masters of Sex. For more, follow the jump.

Service To Launch In Early July To Apple® Customers

NEW YORK – June 3, 2015 – For the first time ever, SHOWTIME will be offered over the internet as a stand-alone streaming service launching in early July, with Apple as its first partner. The stand-alone service will be called SHOWTIME, a brand already embraced by consumers as the home for cutting-edge original programming, sports and movies. The launch of SHOWTIME will coincide with the new seasons of the critically-acclaimed, hit series RAY DONOVAN and MASTERS OF SEX, premiering on Sunday, July 12th.

iPhone®, iPad®, iPod touch® and Apple TV® users will be able to subscribe to SHOWTIME as a stand-alone service on the SHOWTIME app anywhere in the U.S., for one monthly price ($10.99) to view on all Apple devices. To learn more about SHOWTIME, watch and share: http://s.sho.com/1FTryf8. Additional platforms and providers will be announced soon. The announcement was made today by Leslie Moonves, CBS Corporation’s President and Chief Executive Officer, and Matthew C. Blank, Chairman and CEO, Showtime Networks Inc.

“Going over-the-top means Showtime will be much more accessible to tens of millions of potential new subscribers,” said Moonves. “Across CBS, we are constantly finding new ways to monetize our programming by capitalizing on opportunities presented by technology.  This works best when you have outstanding premium content – like we do at Showtime – and when you have a terrific partner like Apple – which continues to innovate and build upon its loyal customer base.”

“At Showtime, we’re excited to offer consumers the opportunity to subscribe in new ways, by simply having an internet connection,” said Blank. “Our intent is to make SHOWTIME available to viewers via every manner possible, giving them an enormous amount of choice in accessing our programming, starting with the season premieres of our award-winning series RAY DONOVAN and MASTERS OF SEX.”

“We’re excited to offer Apple customers SHOWTIME’s live channels and extensive on demand library of great TV shows and movies, without a cable or satellite subscription,” said Eddy Cue, Apple’s senior vice president of Internet Software and Services. “iPhone, iPad, iPod touch and Apple TV customers will now be able to subscribe to SHOWTIME directly and instantly start viewing their favorite programming with the same simplicity as buying an app.”

Subscribers will have unlimited on demand access to every season of award-winning SHOWTIME original series, and hundreds of hours of movies, documentary and sports programming, as well as the live broadcast of the east and west coast feeds of SHOWTIME. Showtime will offer a 30-day free trial to new customers who sign up through Apple in July. Apple users simply need to go to the SHOWTIME app on their device to sign up and create a SHOWTIME account.  Subscribers can use their SHOWTIME account to watch the service across all supported devices, as well as online at www.showtime.com.

Showtime and its acclaimed original programming continues to make its mark on the cultural landscape. The network is home to one of the most successful programming line-ups in all of television, with hits that include HOMELAND, RAY DONOVAN, THE AFFAIR, MASTERS OF SEX, PENNY DREADFUL, SHAMELESS, HOUSE OF LIES, NURSE JACKIE, HAPPYish, EPISODES, and the anticipated new series BILLIONS and the limited series TWIN PEAKS. Original series play a key part in the network’s programming mix, along with box office hits, comedy and music specials, provocative documentaries, and hard-hitting sports programming, including the flagship franchise SHOWTIME CHAMPIONSHIP BOXING® and the news magazine programs 60 MINUTES SPORTS and JIM ROME ON SHOWTIME. The network’s diverse slate of films includes Boyhood, Lee Daniels’ The Butler, Philomena, St. Vincent, The Imitation Game and Sin City: A Dame to Kill For.

Showtime Networks Inc. (SNI), a wholly-owned subsidiary of CBS Corporation, owns and operates the premium television networks SHOWTIME®, THE MOVIE CHANNEL™ and FLIX®, and also offers SHOWTIME ON DEMAND®, THE MOVIE CHANNEL™ ON DEMAND and FLIX ON DEMAND®, and the network’s authentication service SHOWTIME ANYTIME®. Showtime Digital Inc., a wholly-owned subsidiary of SNI, operates the stand-alone streaming service SHOWTIME®. SNI also manages Smithsonian Networks™, a joint venture between SNI and the Smithsonian Institution, which offers Smithsonian Channel™. SNI markets  and distributes sports and entertainment events for exhibition to subscribers on a pay-per-view basis through SHOWTIME PPV. For more information, go to www.SHO.com.

CBS Corporation (NYSE: CBS.A and CBS) is a mass media company that creates and distributes industry-leading content across a variety of platforms to audiences around the world. The Company has businesses with origins that date back to the dawn of the broadcasting age as well as new ventures that operate on the leading edge of media. CBS owns the most-watched television network in the U.S. and one of the world’s largest libraries of entertainment content, making its brand —“the Eye” — one of the most recognized in business. The Company’s operations span virtually every field of media and entertainment, including cable, publishing, radio, local TV, film, and interactive and socially responsible media. CBS’s businesses include CBS Television Network, The CW (a joint venture between CBS Corporation and Warner Bros. Entertainment), CBS Television Studios, CBS Global Distribution Group (CBS Studios International and CBS Television Distribution), CBS Consumer Products, CBS Home Entertainment, CBS Interactive, CBS Films, Showtime Networks, CBS Sports Network, Pop (a joint venture between CBS Corporation and Lionsgate), Smithsonian Networks, Simon & Schuster, CBS Television Stations, CBS Radio and CBS EcoMedia. For more information, go to www.cbscorporation.com.