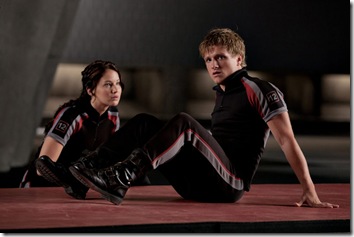 Hollywood has been known to suck the life out of adaptations from other media even while getting all the details right – one only has to look at last summer’s Green Lantern to see how that works. So, as a fan of the Hunger Games Trilogy, I went into the screening with a combination of fear and hope [two key elements of the series]. For me, there was a key moment [fans of the books will probably guess what that moment was] that, if they got it right, really right, then the movie would work. They did. I cried. The movie worked.

With all the buzz about the books [26 million copies sold in North America], even people who haven’t read them are probably more than aware of the basic story – as punishment for a long ago rebellion, each of the twelve districts of Panem [the bread in the Roman ‘bread and circuses’] must give two young people – one boy, one girl – to take part in the annual Hunger Games. Think a combination of American gladiator and Survivor, only played to the death. Last one alive wins.

When Primrose Everdeen of District 12 is chosen in the selection lottery, called The Reaping, her older sister, Katniss [Jennifer Lawrence] volunteers to take her place. Peeta Mellark [Josh Hutcherson], son of a baker, is selected, too. Following a brief period for goodbyes [Prim and her mom get three minutes; Katniss’ best friend all of thirty seconds] the two are taken by train to the Capitol.

The Capitol’s representative, Effie Trinket [Elizabeth Banks], who selected the District 12 Tributes [as they are called], is our first look at the decadence of the Capitol – a flamboyantly dressed figure hidden behind an outlandish purple outfit [including six-inch stiletto heels] and caked on white make-up. She’s all enthused by the Games and acts as Katniss and Peeta’s shepherd, accompanying them to Capitol and making sure they have some idea of how to behave while there.

They are also accompanied by the drunken Haymitch Abernathy [Woody Harrelson], District 12’s one winner of the Games – and not especially happy, at first, to be there. Harrelson plays Haymitch with the kind of precision, especially in his speech, of a drunk who doesn’t want to actually appear drunk – even though he knows everyone else knows.

The tributes are paraded before a live audience of over 100,000 people; forced to go on a talk show hosted by the unctuous Caesar Flickerman [Stanley Tucci] and given ‘survival training. Thanks to their designer, Cinna [Lenny Kravitz], Katniss and Peeta make quite a splash – both in the parade and in their interviews with Flickerman [a popinjay with bright blue hair done up in a huge bun, and a shiny silver suit]. Finally, the Tributes show of their special skills and the Games begin.

The first hour of The Hunger Games sets up the essentially creepy decadence of the Capitol and purity of heart – and special skills of Katniss. We get brief glimpses of the other Tributes and even a few moments from some of their interviews with Flickerman. We get a very brief look at life in District 12 and see Katniss go hunting with her best friend, Gale [Liam Hemsworth, very good in very little screen time]. 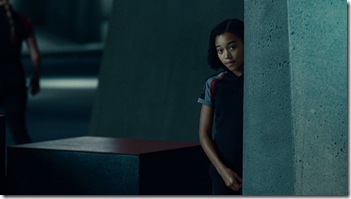 The last hour and a half is The Games, from the bloody free-for-all at the Cornucopia – where weapons and survival gear are stacked – which leaves six of the twenty-four dead, through the final kill. The kills at the cornucopia are the bloodiest, though they are captured by handheld cameras, so although they are horrific and bloody, no one kill is lingered upon longer than absolutely necessary to make us believe that this is happening.

When the film cuts between the nastiness in the arena and the audience watching, it really does make us believe that the Capitol’s people are like the ancient Romans, reveling in gladiatorial combat. It is also easy see how the books could have been inspired by author Suzanne Collins’ switching between reality TV and the news [as she’s said in any number of interviews].

Within the Games, temporary alliances are formed – some a seeming betrayal; others between Tributes who might, under other circumstances, have been friends. One such alliance is between District 11’s Rue [Amandla Stenberg, who was so brilliant as the young Zoe Saldana in Colombiana] and Katniss. It is here that Katniss unknowingly sows the seeds for the remaining films in the series. Stenberg has a pivotal role, but little time to make it work, yet she does so with a natural grace that rivals Lawrence’s performance as Katniss.

As in the book, Peeta quickly takes to the PR stuff that’s essential to get sponsors to provide supplies and medicine once the Games have begun. Hutcherson plays Peeta with the kind shrewdness and intelligence that he isn’t seen as manipulative, but just aware of the reality of what it will take to survive – and the willingness to go there.

Hutcherson and Lawrence have great chemistry, but it’s not the easy chemistry she has with Hemsworth. Instead, it’s the kind of chemistry that grows through an awkward phase – like when you discover that someone likes you a lot but you’ve never even thought about it before, but when you do, it kind of grows on you.

There a number of changes that were made to tell The Hunger Games in film form, the biggest being that it isn’t told from Katniss’ point of view. As a result, we get to see scenes she would not be aware of – like the scenes between President Snow and Seneca [Wes Bentley], in which we see just how evil Snow is behind his grandfatherly façade, or the scene in which Haymitch works on potential sponsors to help Katniss and Peeta.

Overall, director Gary Ross has created a movie that hits its satirical notes pretty well bang on; gives us characters that we get to know as much through their actions in the Games as what we see prior, and makes us believe that a sixteen-year old girl could, however inadvertently, become someone who can affect change by simply being who she is. For his next trick Ross gets to show us how Katniss comes to believe she can actually do that… I can’t wait.