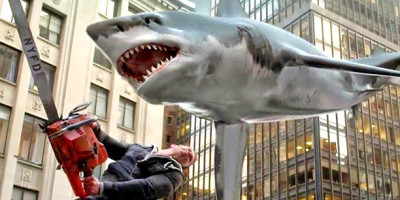 Floridians are about to experience a Sharknado! Syfy’s Sharknado 3 will shoot key scenes at Universal Orlando Resort.

This time out, the Sharknado will wreak mass destruction in Washington, D.C. before ‘roaring down the Eastern Seaboard and into Florida.’

Ian Ziering, Tara Reid and Cassie Scerbo star in Sharknado 3, which is set to premiere in July. For further details, follow the jump.

NEW YORK – February 19, 2015 – Now Florida will know what it feels like to be hit by a Sharknado! The eagerly anticipated Syfy and The Asylum production Sharknado 3 will shoot key scenes at Universal Orlando Resort, it was announced today.

Featuring stars Ian Ziering, Tara Reid and Cassie Scerbo, Sharknado 3 will premiere on Syfy in July, causing mass destruction in the nation’s capital, Washington, D.C., before roaring down the Eastern Seaboard and into Florida. Ziering and Reid will reprise their roles as Fin and April, respectively, while Cassie Scerbo will play Nova, her character from the original 2013 Sharknado movie.

Anthony C. Ferrante will once again direct, based on an original screenplay by Thunder Levin.

Sharknado 3 is a production of The Asylum.

When it aired last July 30, Sharknado 2: The Second One became Syfy’s most-watched Original Movie ever with 3.9 million total viewers.

The Asylum is one of the world’s leading brand-oriented motion picture and television studios. With a focus on high-concept, market-driven entertainment, like the SHARKNADO franchise, The Asylum finances, produces and releases 25 films per year through its direct pipeline to the nation’s top retailers and its network of international partners. Since its founding in 1997, The Asylum has released more than 500 films and has built a library of over 200 original productions, including top-rated movie premieres for Syfy, Lifetime, and Animal Planet networks. In 2014, The Asylum made its first foray into series television with Z NATION, a critically-acclaimed 13-episode action-horror series on Syfy. Z NATION drew high ratings and will return for a second season in 2015.