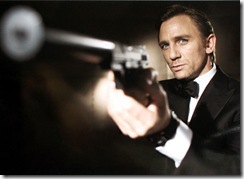 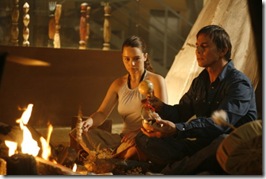 NEW YORK – November 1, 2010 – This Thanksgiving weekend, Syfy will be serving up a mega James Bond movie marathon featuring EVERY leading man from Sean Connery and Roger Moore to Pierce Brosnan and Daniel Craig (along with George Lazenby and Timothy Dalton).

The 43-hour 007-fest kicks off Wednesday, November 24, at 11PM (ET/PT) and runs Thanksgiving Day (8AM-3AM), highlighted by classic Bond romps such as GoldenEye, The World is Not Enough and Casino Royale, before concluding Friday, November 26.

For those not content with mere turkey bones, Saturday, November 27 will be Dino Night on Syfy. Jurassic Park kicks off the evening at 6PM (ET/PT), followed by the premiere of the Saturday Original Movie Triassic Attack at 9PM (ET/PT).

Directed by Colin Ferguson (Eureka), the movie is about a kitschy novelty storeowner who accidentally brings to life three dinosaur fossils. Now pretty annoyed, the giant dinos wreak havoc on the small town and the local university.  With the help of some local residents, the county Sheriff must fight off the giant beasts until he can figure out how to stop them. Triassic Attack stars Raoul Trujillo (True Blood) and Steven Brand (Scorpion King). A production of UFO International Productions.

Syfy starts the holiday season with a pair of marathons on November 24. Ghost Hunters, the #1 paranormal investigative franchise on television, scares up episodes from 8AM-8PM (ET/PT), followed by the new series Hollywood Treasure from 8PM –11PM (ET/PT).