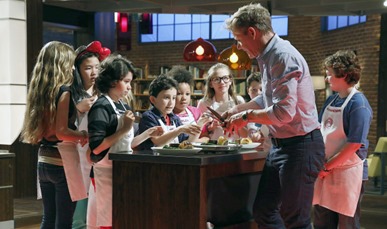 Apparently, kids with knives draw a sufficient audience that Fox has been compelled to pick up Master Chef Junior for a second season. And, with that pickup, comes the announcement of open casting calls for competitors in New York City and Chicago on January 18th and Los Angeles and Dallas on January 25th.

“MASTERCHEF JUNIOR is one of the few shows on television that the entire family can truly enjoy together, and  I can’t wait to see what Gordon, Joe, Graham and the next round of rambunctious, ridiculously talented junior chefs cook up in Season Two,” said Reilly.

MASTERCHEF JUNIOR gives talented kids between the ages of eight and 13 the chance to showcase their culinary ability and passion for food through a series of delicious challenges. Host and award-winning Chef Gordon Ramsay is joined by restaurateur and winemaker Joe Bastianich (Del Posto, Eataly) and acclaimed chef Graham Elliot (Graham Elliot Bistro) on the MASTERCHEF JUNIOR judging panel.

Open casting calls for Season Two of MASTERCHEF JUNIOR will be held in the following cities:

Visit masterchefjuniorcasting.com for the most up-to-date audition information. Details, including venues and times, to be announced.

About One Potato Two Potato

One Potato Two Potato was co-founded by Gordon Ramsay and Optomen Television in 2008 to exclusively create and produce worldwide content for Ramsay ventures across all media, including television, digital and publishing. Renowned for award-winning original programming, the company produces high-quality TV shows on both sides of the Atlantic, including the smash-hit HOTEL HELL, which was the highest-rated new network show of summer 2012; the blockbuster MASTERCHEF and new hit MASTERCHEF JUNIOR, all for FOX; major food competition series “Food Court Wars”; as well as massive U.K. hit “Gordon Ramsay Behind Bars” and “Gordon Ramsay’s Great Escape” for Channel 4; and “My Kitchen,” for UKTV’s Good Food Channel. Ramsay’s groundbreaking and hugely popular Channel 4 series, “Cookalong: LIVE,” aired as a special on FOX and has since become a successful format around the world. OPTP is also currently in development on several exciting unscripted and scripted projects, within and beyond the food genre, for network, cable and digital platforms in the U.S., U.K. and around the world. OPTP distributes its hugely popular TV programming and formats to more than 200 territories via Optomen International. The company became part of the All3Media group in 2010. Find out more about One Potato Two Potato at onepotatotwopotato.tv.

Shine America is a world leader in producing and distributing compelling scripted and unscripted television and digital content. Shine America is known for popular and award-winning original series including “The Biggest Loser” and “The Face,” as well as adaptations of Shine Group formats such as MASTERCHEF, MASTERCHEF JUNIOR, “Minute to Win It” and the upcoming series SLIDE SHOW, as well as scripted series including “The Bridge” and the upcoming GRACEPOINT. Shine America incorporates several divisions, including unscripted format label Ardaban and Shine Latino, which develops and distributes original Spanish-language content to the U.S. marketplace. The company also has a joint-venture with award-winning producer Nigel Lythgoe (Nigel Lythgoe Productions). The global Shine 360? division builds brands through the leveraging of its intellectual property and creating integrated marketing opportunities for advertisers. The company has also developed over 20 groundbreaking original online series on MSN, Yahoo!, YouTube premium channels and other platforms, many produced in partnership with global brands. Through Shine Group’s distribution arm, Shine International, Shine America distributes its extensive library of programming and formats to more than 150 countries. Visit www.shineamerica.com for further information.

Season One photo by Greg Gayne/Courtesy of Fox Television