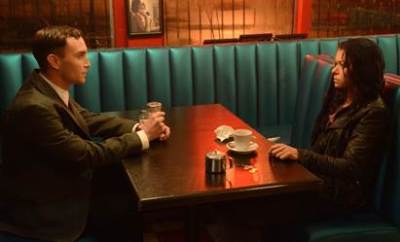 Production has begun on Season Three of BBC America’s hit series Orphan Black. The already complex series will be adding new layers this season now that the Clone Club (Sarah, Cosima and Allision – all played by Tatiana Maslany) isn’t the only array of clones in town.

Plus, we get to see if Ari Miller can match Tatiana Maslany’s chops as he plays an array of clones, too. That should make for compelling viewing even without the myriad other machinations going on on the show.

Season three of Orphan Black  will be in production throug March 25, 2015 – and will premiere in the spring. For more details, follow the jump.

Toronto – October 16, 2014 – Production has begun on the third season of BBC AMERICA’s Peabody Award-winning series Orphan Black. The conspiracy thriller (10 x 60) stars award-winner, Tatiana Maslany, who returns to her unprecedented lead role as multiple clones. The critically-acclaimed, action-packed series that sparked an inspired fan base named Clone Club, unveiled new and more treacherous enemies in season two.  But it was the finale that shocked viewers when it introduced a male line of clones, raising more complex questions that left viewers on the edge of their seats. Orphan Black is produced by Temple Street Productions in association with BBC AMERICA and Bell Media’s Space.

“Season two of Orphan Black not only doubled its audience, it also treated fans to double the number of clones,” says Perry Simon, General Manager, BBC AMERICA.  “Our network’s commitment to creating long-lasting original programming that hooks viewers and never lets them go is perfectly illustrated through this buzz-worthy series.”

Season three plunges the clone sisterhood into unexpected territory with the realization that they’re not alone.  Just when they thought they knew their enemies and allies, season three reveals our clones are more vulnerable than ever before. Highly trained, identical male-soldiers raise more questions than answers. Who are these new clones? Who created them? And more importantly, why do they exist?   Sarah, Cosima, Alison and Helena are stronger together than they are apart, but this season will put that bond to the test.  Will they forge towards their truth, or fall at the feet of those that seek to control them?

Returning in a lead role is Ari Millen, who plays the newly discovered male clones – Mark, the Prolethean cult follower and Rudy, a prisoner of war. Also back this season is Jordan Gavaris as Sarah’s fiery foster brother Felix, Dylan Bruce as Paul, an army officer working for secret forces in the clone world, Maria Doyle Kennedy as Sarah and Felix’s duplicitous foster mother Mrs. S, Evelyne Brochu as Dyad Scientist and Cosima’s lover Delphine, Kevin Hanchard as Art, a detective caught in the clone trap, Michiel Huisman as Cal, father to Sarah’s daughter Kira (Skyler Wexler) and Zoé De Grand Maison as Gracie, a Prolethean escapee.  Additional casting for the series will be announced in the coming weeks.

“We are incredibly proud and delighted to be commencing production on season three of Orphan Black,” commented David Fortier and Ivan Schneeberg, executive producers of Orphan Black and Co-Presidents of Temple Street Productions.  “We’ve been fortunate to work with one of the best cast and crews in the business for the last two seasons. We could not be happier about the success of the show and how it continues to be embraced by audiences around the world.”

“We are thrilled to be underway on another season of the gripping original series Orphan Black with our wonderful partners Temple Street Productions and BBC AMERICA,” said Corrie Coe, Senior Vice-President, Independent Production, Bell Media. “After the shocking finale of Season 2, we are excited to share with our viewers the next dramatic twists and turns in the clone conspiracy, as conceived by series creators Graeme Manson and John Fawcett.”

BBC AMERICA’s Orphan Black became the first ever ad-supported drama series to double its ratings from season one to season two in A25-54 and 18-49 in Live+7.*  The original series is co-created by Graeme Manson and John Fawcett, with Manson also serving as writer and Fawcett as director. The international hit series is distributed by BBC Worldwide and can be seen in more than 170 countries. The first two seasons are currently available on Blu-ray and DVD and via digital download on all partner platforms.  Season one is available for live streaming through Amazon Prime. For more information on where to catch up on Orphan Black, visit www.bbcamerica.com/orphanblack.

Orphan Black is shooting in Toronto through March 2015 and returns on BBC AMERICA in Spring 2015.

BBC AMERICA delivers U.S. audiences high-quality, innovative and intelligent programming. Established in 1998, it has been the launch pad for talent embraced by American mainstream pop culture, including Ricky Gervais, Gordon Ramsay, Graham Norton, and successful programming formats including ground-breaking non-scripted television like Top Gear and top-rated science-fiction like Doctor Who. Owned by BBC Worldwide, the commercial arm of the BBC, BBC AMERICA has attracted both critical acclaim and major awards including four Emmy® Awards, five Golden Globes® and 12 Peabody Awards. The channel attracts one of cable’s most affluent and educated audiences and is available on cable and satellite TV in 80 million homes. It broadcasts in both standard and high-definition, with content available On Demand across all major digital platforms. Online, www.BBCAmerica.com is the place to go to dig deeper into pop culture with a British twist. Find out more by visiting www.Press.BBCAmerica.com/ or follow us on www.twitter.com/BBCAMERICA.