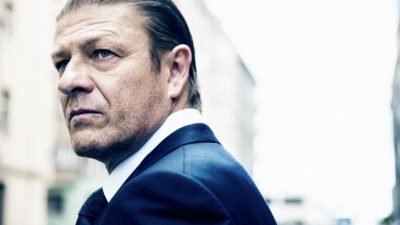 Sean Bean has signed on to play Tom Hammond in The Oath – a gritty, action-packed drama that explores the world of gangs made up of those sworn to protect and defend and sheds light on corrupt and secret societies that are nearly impossible to join.

Crackle’s The Oath will premiere in 2018.

Set to debut in 2018, the 10-episode original is executive produced by Curtis “50 Cent” Jackson and his G-Unit Film & Television Inc. and the premiere episode will be directed by Jeff T. Thomas (“Blindspot,” “Wayward Pines”).  A gritty, action-packed drama, “The Oath” explores a world of gangs made up of those sworn to protect and defend and sheds light on corrt and secret societies that are nearly impossible to join—only a select few make the cut–but once inside, members will do what they must to protect each other from enemies on the outside and from within their own ranks.

Tom Hammond, portrayed by Bean, ?is a hard-charging cop and ruthless leader of the prominent gang made up of those who are meant to enforce the law. After doing a deal with an undercover FBI agent, Hammond finds himself behind bars but after he’s released, his desire to make his way back to the top of the food chain and back in control of the gang he once led puts him head to head with those who used to have his back.

“Sean Bean is the perfect choice for the role of Tom Hammond,” said Eric Berger, Crackle GM and EVP, Digital, Sony Pictures Television Networks.  “He embodies the grit and intensity that drives this character throughout the series’ uncompromising and fast paced narrative. We are excited to have him anchor this incredible production from Joe Halpin and 50 Cent’s G-Unit division.”

“The Oath” is executive produced by Curtis “50 Cent” Jackson and his G-Unit Film & Television Inc., Todd Hoffman and Dennis Kim of Storied Media Group and Joe Halpin who is also creator, writer and showrunner.

Bean is represented by CAA and Jane Epstein at Independent Talent in the UK.

Academy Award®-winning actor Sean Bean has enjoyed a 20 year career that spans across theatre, radio, television and film. Having graduated from the Royal Academy of Dramatic Arts (RADA) in 1983, he was instantly propelled into the world of drama arts. Sean began his career on stage and in the West End stage, productions include RSC’s Fair Maid of the West (1985) and Killing The Cat (1990) before he moved onto the big screen.

In film, Sean starred in The Lord of the Rings (2004) as the emotionally torn character Boromir, a role for which Sean received the Critics’ Choice Movie Award for Best Acting Ensemble, an Emmy Award for Best Performance by an Actor and a Screen Actors Guild Award for Outstanding Performance by a Cast in a Motion Picture. Other period titles include his role in Troy (2004) and more recently he began filming The Frankenstein Chronicles (2017) alongside actor Laurence Fox.

In television, Sean is perhaps best known for his role in the Award winning series, Game of Thrones (2011), his character Eddard “Ned” Stark survived Series 7 and it was a role that truly cemented his legendary skill and talent for acting.

Sean will return to our television screens this spring for the BBC’s latest TV Drama series Broken, alongside Anna Friel, a heartfelt and gritty Northern Drama that promises to be utterly mesmerizing.

In 2005, Curtis “50 Cent” Jackson founded the production company, G-Unit Film & Television, Inc. producing a wide variety of content across various platforms. Jackson has quickly sold a myriad of projects to various networks. Among these is the record shattering “Power,” STARZ’s number-one series that premiered in June 2014, in which Jackson not only stars in but also serves as executive producer. In July 2016 it was announced that STARZ extended Jackson & G-Unit Film & Television, Inc.’s exclusive overall deal for another year into September 2018 to develop new projects for the network and continue as executive producer on “Power.” Additional announced G-Unit Film & Television, Inc. credits include: the variety show “50 Central” on BET,  two dramas, “The Oath,” and “RPM” (WT) for Crackle, Sony Pictures Television Networks, the development of “Tomorrow, Today” on STARZ and SundanceTV’s critically acclaimed series “Dream School.”