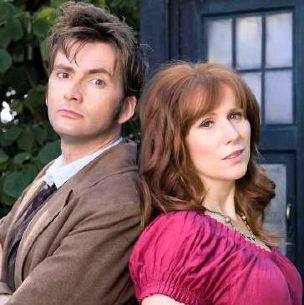 Fans of the People’s Choice Nominated science fiction series Doctor Who are in for a double treat. The network today announced the acquisition of Doctor Who Season Four and the premiere season of the Whovian spin-off, The Sarah Jane Adventures!

Fans of the last of the Time Lords – now in his tenth incarnation [and ninth regeneration!], will be able welcome The Doctor [David Tennant] into their living rooms in all new episodes beginning in April. This season will see the introduction of a new companion, Donna Noble [Catherine Tate]. Noble is notable as being one of the few characters in Who history to initially turn down an invitation to join The Doctor in his travels [see the 2006 Doctor who Christmas special, The Runaway Bride]. Third season companion, Martha Jones [Freema Agyeman] will appear in a limited number of adventures beginning near mid-season.

Also, due to her unparalleled popularity as the fans’ favorite Doctor who companion – a popularity that was renewed [regenerated, maybe?] by her guest appearance in the School Reunion episode of the new Who’s first season – Sarah Jane Smith [Elisabeth Sladen] has been given her own show: The Sarah Jane Adventures.

Reunited with her fellow former Who companion, K-9 [who also appeared in School Reunion], Sarah Jane and a trio of especially adventurous teens protect the Earth from alien [and other] attacks. The show also features Yasmin Page [as Maria Jackson] and Daniel Anthony [as Clyde Langer] who stumble into an extremely odd situation and join Sarah Jane, her adoptive son [and former entry point for an alien invasion of Earth], Luke [Tommy Knight] and Mister Smith [voiced by Alexander Armstrong] – a sentient alien computer – in their adventures. Although the series is aimed at a young audience than Doctor Who, its combination of intelligence,  wit and charm is a perfectly enjoyable experience for the whole family. The Sarah Jane Adventures will also make its American debut in April.Candace Carlisle, EVP Sales and Co-productions, BBC Worldwide Americas commented, “The imagination of Russell and the rest of the production team in Cardiff who have produced these two incredible shows is outstanding.  We are so pleased that the loyal fans of the SCI FI Channel will be able to meet a whole new range of characters and aliens that are intrinsically linked to the Doctor’s history.  Both ‘Sarah Jane Adventures’ and the new season of ‘Doctor Who’ are jam packed with some of the most creative storylines ever produced by the BBC’s brilliant team.”