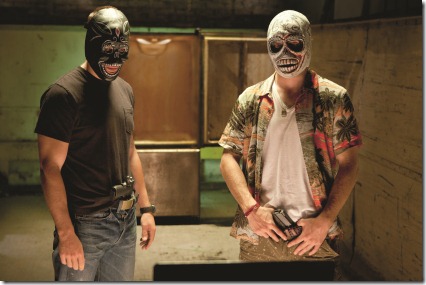 It’s been better than a decade since Oliver Stone made a compelling movie. With Savages, the drought is over.

Ben (Aaron Johnson) and Chon (Taylor Kitsch) run a great business in pot growth and distribution – Ben as the pacifistic genius botanist and Chon as the former Navy S.E.A.L./enforcer on the rare occasions it’s required. O (Blake Lively) – shortened from Ophelia – is the woman who loves them both.

Elena (Salma Hayek) is the head of a Mexican cartel that wants to take over their business, bringing them along as ostensible partners. Alex (Demien Bichir) is her lawyer and Lado (Benicio Del Toro) is her enforcer – who is much busier than Chon.

When Ben and Chon turn down Elena’s generous offer, she has Lado kidnap O. Things get weird from there.

For those who might be interested, Savages is adapted from the novel by Don Winslow (who also co-wrote the script with Stone and Shane Salerno). I haven’t read the book, but understand it to be a very noir tale – which makes it a fertile ground for Stone.

The film opens with grainy footage of a group of Latino men on their knees. We see a chain see, hear it rev up and…

Cut to the beachfront home of Ben, Chon and O. O’s narration sets the tone – it’s the kind of story that, even though she’s telling it, she might not be alive at its conclusion – as we see Chon and O having sex (with Ben, it’s making love – somehow, between the two of them, Ben and Chon equal her perfect man).

As they relax afterward, Chon’s laptop sounds to alert him to an email (you will not believe the ringtone he’s got set for that). It’s a video of decapitated heads and bodies, along with an announcement that he and Ben are expected to attend a meeting when Ben returns from Africa – and, yes, he’s on his way. (I’m not sure which is scarier – the mayhem, or the fact that they know Ben is his way home.)

Despite the graphic invitation, Ben and Chon decline Elena’s offer, precipitating O’s kidnapping. Before the guys can get O back, they have to live up to Elena’s proposed deal. Complications ensue – including the presence of a corrupt DEA agent named Dennis (John Travolta), a Robin Hood-like plan to steal from Elena’s California operation to ransom O, and the unexpected involvement of Elena’s daughter, Magda (Sandra Echevarria). To say that double and triple crosses are ahead is probably to understate the situation. 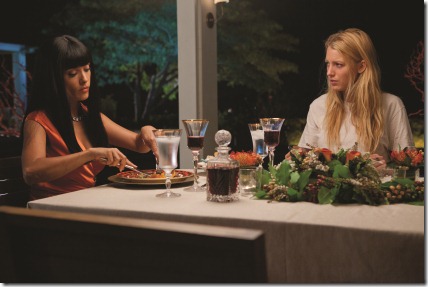 As things bubble and boil, Stone seems to be declaring that, given the right incentive, the most pacifistic of us can and will become Savages – a point he makes early one when Chon refers to Elena’s people as savages following shortly thereafter by Lado describing them in the same way.

Savages is, like all Stone films, beautifully shot. Whether it’s scenes on a California beach (with carefully heightened palette), or O’s makeshift cell (bleached out colors); the graininess of the videos of Lado’s violence, or the searing sandiness of near desert conditions, Stone captures in such specific ways that each scene is beautiful in an appropriate manner, ranging from horrifying to lushly engaging.

Given that Ben and O are the only real innocents among the main cast, watching them change – as he begins to accept the necessity of violence and, eventually, actively engage in it; as she suffers from the degradation of captivity – is really the only way to chart the film’s progress accurately. Everyone else is already capable of so much nastiness.

Stone also does his usual smart job of varying the pacing to achieve maximum effect. The carnage of that initial email on the heels of two people having exhilarating sex lets us know that Stone is holding nothing back in his efforts to yank the audience into his tale. Even though we know violence is coming, with a few careful chosen exceptions, it still arrives as a surprise and we are jolted by it.

Surprisingly, the entire cast is amazing – though Johnson, Kitsch and Lively are not yet at the same level as Bichir, Del Toro, Hayek and Travolta (who does his best work in eons here), they acquit themselves well. Lively, especially, shows nuances we’ve never seen before.

Given that O establishes early on that she might not be the most reliable of narrators, it’s possible that the film’s two endings – yes, there’s a ‘but here’s what really happened’ angle – might not necessarily be the cheat that they seem to be. Both are certainly feasible endings, given the preceding two hours – but one might be real and the other an imagining. The question is whether to take these sequences at face value (always a gamble with Stone), or to look at them from a different perspective.

Despite (or possibly because of) the dual endings and allowing for one or two plotholes (for example, there’s a death that really should have been noticed by someone…), Savages is a strange, twisted and thoroughly entertaining film – maybe the most purely entertaining film Stone has made without getting political in some way.