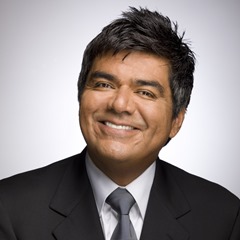 FX’s new George Lopez comedy, St. George, will premiere on Thursday, March 9th (9/8C). The series – which follows the 10/90 model used for Anger Management (if the ratings on the first 10 eps are good enough, an order for 90 more ensues) – follows the life of a newly divorced entrepreneur named George Lopez as he tries to balance the parenting demands of his All-American Anglo ex-wife against the expectations of his overbearing Mexican-American mother.

His efforts to relate to his 11-year old son are complicated by his fun-loving but freeloading uncle and cousin. And then there’s his professional life… For more details, check out the press release after the jump.

Saint George is a half-hour, multi-camera ensemble comedy that follows the chaotic life of “George Lopez,” a recently divorced working class Mexican-American turned successful entrepreneur caught between two cultures.  He struggles to balance the parenting demands of his All-American Anglo ex-wife, “Mackenzie,” and the cultural expectations of his overbearing Mexican-American mother, “Alma.”  As George attempts to relate to his 11-year-old son, “Harper,” his life is further complicated by his fun-loving but freeloading uncle “Tio” and cousin “Junior.” As a wealthy businessman, George also gives back by teaching history to a multi-cultural classroom at a night school in downtown Los Angeles, where he’s supervised by tough and sexy Assistant Principal “Concepcion.”  Ultimately, Saint George is a celebration of a multi-generational family that humorously wrestles with cultural differences.

FX ordered 10 episodes of Saint George as part of a unique syndication model crafted by Debmar-Mercury for multiple sitcoms.  As is standard with the 10/90 model, if the series meets designated ratings thresholds over its first 10-episode run, the network will trigger an additional 90-episode order.

FX is the flagship general entertainment basic cable channel of FX Networks, a business unit of Fox Networks Group. FX Networks is comprised of FX, FXM and FXX, its newest channel, which debuted on September 2, 2013. Launched in June of 1994, FX is carried in more than 97 million homes. The diverse schedule features a growing roster of critically-acclaimed and award-winning hit dramas series, including Sons of Anarchy, Justified, The Americans and The Bridge; the upcoming dramas Tyrant (June ’14) and The Strain (July ’14) the miniseries American Horror Story; the upcoming miniseries Fargo (April ’14); the acclaimed hit comedy series Louie and Archer; and the new animated comedy Chozen. The network’s library of acquired box-office hit movies is unmatched by any ad-supported television network. FX’s roster of acquired hit series includes Two and a Half Men, Anger Management and, coming in 2014, Mike & Molly.

Lionsgate is a leading global entertainment company with a strong and diversified presence in motion picture production and distribution, television programming and syndication, home entertainment, family entertainment, digital distribution, new channel platforms and international distribution and sales. Lionsgate currently has more than 30 television shows on 20 networks spanning its primetime production, distribution and syndication businesses, including such critically-acclaimed hits as the multiple Emmy Award-winning Mad Men and Nurse Jackie, the comedy Anger Management, the network series Nashville, the syndication success The Wendy Williams Show and the critically-acclaimed new series Orange is the New Black. Lionsgate handles a prestigious and prolific library of approximately 15,000 motion picture and television titles that is an important source of recurring revenue and serves as the foundation for the growth of the Company’s core businesses. The Lionsgate brand remains synonymous with original, daring, quality entertainment in markets around the world.