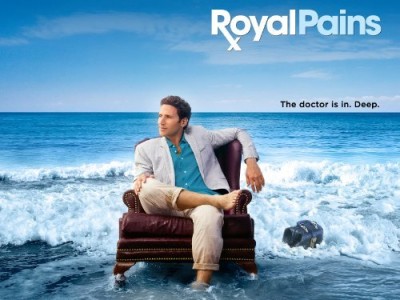 USA Network’s little show that could, is still pushing up the hill. It’s amazing Royal Pains has been on for 7 freaking seasons – which feels even longer due to all the weird scheduling issues. Royal Pains’ 8th and final season begins May 18th. I lost track of the series around season 4. When I left off Divya (Reshma Shetty) was pregnant, they introduced Jeremiah (Ben Shenkman) – who I didn’t like at all and Evan was elected to office. I may have to tune in for the final because I’m curious to see how it all ends.

In its final season, Royal Pains will celebrate the distinguished honor of crossing the 100th episode milestone midway through the season, and will also include a visit to Hong Kong and a unique musical episode featuring several new and returning guest stars.

“Eight seasons of unadulterated joy! Michael, Chewy, Mark and the entire ROYAL PAINS team have been a joy to work with since day one,” said Jeff Wachtel, Chief Content Officer, NBCUniversal Cable Entertainment. “We will thank them forever for creating such a wonderful way to spend our summers.”

“It’s with great sadness, but even greater thankfulness, that we prepare for our final summer sunsets as Royal Pains comes to an end. We couldn’t have imagined a more talented and dedicated writers’ room, cast, or crew, and we couldn’t have asked for better partners than USA Network and Universal Cable Productions,” said creator and executive producer Andrew Lenchewski and executive producer Michael Rauch. “We want to thank Bonnie Hammer, Chris McCumber, Jeff Wachtel and every other member of our network and studio family for tirelessly supporting us over eight magical seasons, and more importantly, for giving us the opportunity to complete this series on our own terms.  We’ll always have The Hamptons.”

Royal Pains final season will explore pivotal life decisions for all of the staff at HankMed, and with everyone’s focus pulled in various directions, the future of the business is at stake. After years in the Hamptons as everyone’s favorite concierge doctor, Hank (Feuerstein) must decide if his professional fulfillment equals his personal fulfillment. Evan (Paulo Costanzo) and Paige (Brooke D’Orsay) endure challenging marital decisions and must examine what family really means to them.

Meanwhile, a number of life events complicate Divya’s (Reshma Shetty) career aspirations. Jeremiah (Ben Shenkman) must choose between research and patient care; and just as Eddie (recurring guest star, Henry Winkler) has earned the trust of Hank and Evan, they discover he still has secrets that can rock their world. All the while, Boris (recurring guest star, Campbell Scott) makes a series of life-altering decisions that could change the group dynamic forever.

A special musical episode will feature guest stars Christine Ebersole and Cloris Leachman. When Ms. Newberg’s (Ebersole) life-long best friend, Annette, (Leachman) visits the Hamptons, she begins seeing every situation around her as a musical number. While Hank attempts to diagnose what is wrong with her, everyone at HankMed bursts into song and dance.

Fans can catch up on season seven of ROYAL PAINS anytime on VOD or via streaming at usanetwork.com.