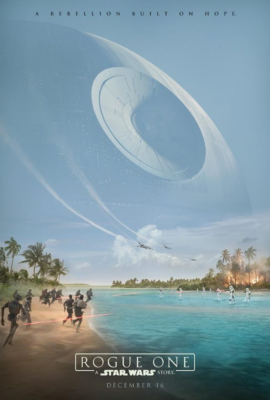 Rogue One: A Star Wars Story will play in more than 50 Dolby Cinemas worldwide when it opens on December 16th. The announcement – by Dolby Laboratories, Inc. and The Walt Disney Studios, was mad this morning.

Details on what, exactly, that means, follow the break.

Rogue One: A Star Wars Story to be Released in Dolby Vision and Dolby Atmos

San Francisco, December 5, 2016—Dolby Laboratories, Inc. (NYSE:DLB) and The Walt Disney Studios today announced that Rogue One: A Star Wars Story, in theatres December 16, will be available in more than 50 Dolby Cinema locations around the globe. Dolby Cinema is a premium cinema offering for moviegoers that combines spectacular image and sound technologies with inspired design to make every visit a completely captivating cinematic event.

“Rogue One: A Star Wars Story, with its attention to every detail from cinematography and visual effects to musical score, deserves to be seen in the cinema with the best sound and image capabilities available,” said Doug Darrow, Senior Vice President, Cinema Business Group, Dolby. “When audiences go to see this movie in Dolby Cinema locations around the world, they will be participating in something special—an experience that only Dolby can deliver.”

Dolby Cinema begins with the filmmakers’ vision—using the full storytelling capabilities that Dolby offers in image and sound production to transform the way movies are made and presented. With state-of-the-art image, sound, and acoustic capabilities, the movie comes alive to deliver cinema in its purest form.

“Like all Star Wars movies, Rogue One is a truly cinematic event, and the Dolby Cinema experience will immerse audiences deeper into the story,” said Lynwen Brennan, Executive Vice President and General Manager, Lucasfilm. “The Dolby Vision and Dolby Atmos technologies beautifully showcase this amazing galaxy, accentuating the intense black of space, the colorful worlds, the dynamic sound effects and epic score – all the hallmarks of a Star Wars film that we can’t wait to share with audiences in Rogue One.”

Dolby Cinema features the Dolby Vision laser projection system, which uses state-of-the-art optics and image processing to deliver high dynamic range with enhanced color technology and a contrast ratio that far exceeds that of any other image technology on the market today. The result is a richer, more detailed viewing experience that delivers strikingly vivid and realistic images and makes viewers feel like they are in the movie’s world. Dolby Cinema also includes Dolby Atmos sound technology, which moves audio around the theatre, even overhead, with amazing richness and depth. The combination of Dolby technologies with the design and comfort of the Dolby Cinema makes audiences feel closer to the onscreen action.

In addition, exclusive Rogue One: A Star Wars Story poster artwork will be available as a free commemorative to ticket holders attending screenings on December 15, 2016, at participating Dolby Cinema at AMC locations. Select Dolby Cinema at AMC locations will also have life-size Death Troopers on display for moviegoers to take photos to enhance fans’ #DolbyCinema and #RogueOne experience.

Pre-sale tickets to Dolby Cinema locations are currently available. For Dolby Cinema at AMC tickets and showtimes, visit www.amctheatres.com/dolby. You can also visit www.dolby.com/movies to learn more about what’s playing at Dolby Cinema.

About Rogue One: A Star Wars Story

Lucasfilm and visionary director Gareth Edwards join forces to bring you the first of the Star Wars stand-alone films, Rogue One: A Star Wars Story. In an all-new epic adventure, a group of unlikely heroes band together on a mission to steal the plans to the Death Star, the Empire’s ultimate weapon of destruction.

Dolby Cinema includes award-winning Dolby Vision and Dolby Atmos technologies. Dolby Vision is a state-of-the-art authoring and playback imaging technology that enables the cinema to bring the story alive onscreen. In 2015, the Dolby Vision laser projector received an engineering excellence award from the Hollywood Post Alliance. Outfitted with Dolby Atmos, a Dolby Cinema transports audiences into the movie with breathtakingly real sound that fills the cinema and flows all around them. Dolby Atmos has received technical achievement awards from both the Hollywood Post Alliance and the Cinema Audio Society.

When these technologies are combined with the sophisticated Dolby Cinema design, everything comes together to pull moviegoers more deeply into the story and transform their visit into an event. In just over a year, nearly 300 Dolby Cinema sites have been installed or committed to across the globe, with nearly 60 titles released or announced.

Dolby Laboratories (NYSE: DLB) creates audio, video, and voice technologies that transform entertainment and communications in mobile devices, at the cinema, at home, and at work. For more than 50 years, sight and sound experiences have become more vibrant, clear, and powerful in Dolby. For more information, please visit www.dolby.com.