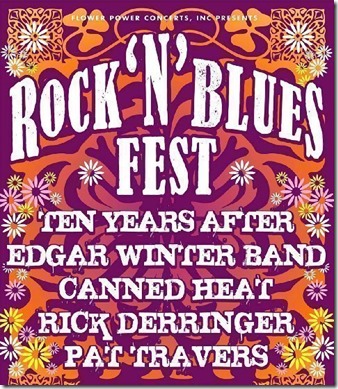 What do you get when you combine nostalgia with great rock & roll and blues? Rock ‘N’ Blues Fest returns for its sophomore tour with a line-up that includes rock and blues greats Ten Years After, Edgar Winter Band, Canned Heat, Rick Derringer and Pat Travers.

The your, which kicks off on July 27th, has booked twenty stops so far. For more details and a list of the twenty stops already booked, follow the jump.

TO RETURN THIS SUMMER WITH AN ARSENAL

OF ROCK AND BLUES LEGENDS INCLUDING

The summertime blues are back and better than ever as the popular Rock’n’Blues Fest tour returns for a second consecutive year with such well-known artists as Ten Years After, Edgar Winter Band, Canned Heat, Rick Derringer and Pat Travers.

All inspired to pick up their instruments due to their love for rock and blues, these five artists will be hitting the road together for approximately a month beginning July 27 at The Cannery Casino in Las Vegas, Nevada.

Edgar Winter and Rick Derringer return from last year, where they performed many a sold out show with Johnny Winter, Leslie West and Kim Simmonds.

In 1967, four young musicians from Nottinghamshire, England — Leo Lyons, Ric Lee and Chick Churchill together with Alvin Lee — formed Ten Years After and became one of the biggest names in music and one of the most explosive quartets on the world stage. Their now legendary encore, "I’m Going Home," performed at Woodstock in August 1969, was captured on film and exposed their jazz, blues, rock amalgam to a large audience, who were blown away by the intensity of the band’s performance when the Academy Award winning documentary was released. Their ten-minute appearance in the film is an acknowledged highlight and established Ten Years After a place in rock history. In 1971, the band had a Top 40 hit with "I’d Love To Change The World." After Alvin Lee left the band for a solo career, Ten Years After ceased recording and touring. A chance opportunity in early 2002 for the other three original members of Ten Years After (bassist Leo Lyons, drummer Ric Lee and keyboardist Chick Churchill) to work together again gave them an insight into the intense, re-awakened interest in the band. In 2003, vocalist/guitarist Joe Gooch joined the line-up and the band soon released a studio album titled Now, which was followed by a live effort in 2005. Today, they are recreating the music, energy and excitement they’ve been known for over the past several decades.

"All the members of Ten Years After are enthusiastic about reuniting with Edgar, Rick and especially Canned Heat again," states Ric Lee. "Original members Chick Churchill, Leo Lyons and I first performed alongside Canned Heat at the legendary Fillmore Ballroom on our first tour of the United States in 1968 and have remained good friends ever since. We are also excited to tour the U.S. as we pay tribute to band-mate Alvin Lee, while igniting a new wave of youthful excitement and appeasing long-term fans."

Alvin Lee, for those unaware, passed away earlier this year from "unforeseen complications following a routine surgical procedure."

Joining Ten Years After for the Rock’n’Blues Fest "ride" will be Edgar Winter, who has certainly met with considerable acclaim in his own right with such monster hits as "Free Ride" and the chart-topping rocker, "Frankenstein."

A multi-instrumentalist (keyboards/sax/percussion) whose music encompasses many different genres including rock, blues, jazz and pop, Edgar Winter first hit the national spotlight with his early recording of "Tobacco Road," featured on his 1970 debut album, Entrance. Edgar would soon form the band White Trash and release two hit albums in ’71 and ’72 titled, Edgar Winter’s White Trash and Roadwork. Hot on the heels of the certified gold album, Roadwork, Edgar would put together an entirely new outfit called The Edgar Winter Group that would originally feature guitarist Ronnie Montrose. In 1973, the band’s first effort, They Only Come Out at Night, would spawn both the hit singles, "Free Ride" (#14) and "Frankenstein" (#1), and remain on the charts for an incredible 80 consecutive weeks. The pivotal album would eventually reach double-platinum status, selling more than 2 million copies. With over 20 albums and numerous collaborative efforts to his credit, Edgar Winter has not been satisfied to ride the wave of popular music stardom. His music has been featured in several major national television and radio and advertising campaigns. In addition, his music can be heard in no fewer than fifteen film and television projects.

"This is Edgar Winter, and we will be rockin’ the blues again this year on the Rock’n’Blues Fest Tour. For those of you who saw us last year, we will be doing a new and very different show. 2013 marks the fortieth year since the release of ‘Frankenstein’ and ‘Free Ride’ on the album, They Only Come Out At Night. So we intend to celebrate the occasion by playing some of the songs from that album I haven’t done in years — like ‘We All Had A Real Good Time,’ ‘Hangin’ Around,’ and ‘Undercover Man.’ We are very excited, this one’s going to be a blast! It means the world to me to be playing the music I love, and see you all out there having a good time. So we look forward to seeing you at one of the shows, and get ready to ROCK ‘n’ ROLL!!!"

Joining the tour for the first time is Canned Heat who rose to fame because their knowledge and love of blues music was both wide and deep. Emerging in 1966, Canned Heat was founded by blues historians and record collectors Alan “Blind Owl” Wilson and Bob “The Bear” Hite. Drawing on an encyclopedic knowledge of all phases of the genre, the group specialized in updating obscure old blues recordings. Canned Heat’s unique blend of modern electric blues, rock and boogie has earned them a loyal following and influenced many aspiring guitarists and bands during the past four decades. Their Top 20 country-blues-rock songs from 1968, "On The Road Again" and "Going Up The Country," became rock anthems throughout the world with the latter being adopted as the unofficial theme song for the film Woodstock. Their cover version of Wilbert Harrison’s "Let’s Work Together" was actually their biggest hit as it rose to #1 in 31 different countries around the world.

"We are all looking forward to a great tour with our longtime friends of Ten Years After and Edgar Winter," says Skip Taylor, Canned Heat’s longtime manager. "It should be as much fun for us as for the audience."

Next on the bill is rock guitarist Rick Derringer, who’s had an illustrious career as both a solo artist and critical band member.

Air guitarists will surely be out in force when Rick breaks into his well-known rock anthem, "Rock and Roll, Hoochie Koo." The song, released in ’73, continues to be a staple on rock radio and was featured in several movies including The Spirit of ’76, Rush, Stag, What A Girl Wants and the cult classic, Dazed and Confused. It’s a little known fact that years before his success as a solo artist, Rick had a band at the age of 17 called The McCoys that had a #1 hit in 1965 called, "Hang on Sloopy." The song would eventually be knocked out of the top spot by The Beatles’ "Yesterday." A year after its release, The McCoys would find themselves as the openers for the entire Rolling Stones American tour. In 1977, Rick would appear on the last Led Zeppelin North American Tour and, in the years to follow, would perform with such artists as Alice Cooper ("Under My Wheels"), Steely Dan ("Show Biz Kids" and "Chained Lightning"), KISS, Todd Rundgren and Weird Al Yankovic among others including the Winter brothers, Johnny and Edgar. From 1986 to 1992, Rick would tour with Cindy Lauper and co-write a song from her True Colors album titled, "Calm Inside The Storm." In 2011, Rick toured Europe with Ringo Starr as a member of Ringo’s All-Starr Band just prior to embarking on that year’s Hippiefest tour.

While most bluesy hard rock acts of the ‘70s and ‘80s hailed from the United States, there were several exceptions to the rule, such as Canadian singer/guitarist Pat Travers who also joins the Rock’n’Blues Fest tour for the first time. Born in Toronto, he first picked up the guitar just prior to entering his teens, after witnessing a local performance of the great Jimi Hendrix. His first touring gig came his way when he hooked up with ‘50s Rock & Roll vet Ronnie Hawkins. But Travers main love was hard rock so, after a year, he headed to London before returning to North America and setting his sights on the U.S. rock market. With the new Travers band, Pat enjoyed his most commercially successful period, resulting in a pair of Top 30 releases, "Boom Boom (Out Go The Lights)" from the album, Live! Go For What You Know, and "Snortin’ Whiskey" from Crash and Burn. Travers continues to tour and record regularly, rocking the masses wherever he goes…

"I am so excited to be part of a tour that has some of my favorite artists on it playing some of best music ever written and performed. This is Pat Travers and I’m champing at the bit to get the chance to play a lot of Rockin’ Blues on the Blues Fest Tour this Summer 2013."

Change the world with Ten Years After!

Unleash "the monster" with Edgar Winter!

Work together with Canned Heat!

Hang on with Rick Derringer!

Watch the lights go out with Pat Travers!

You know where it’s at…

*More dates to be announced.