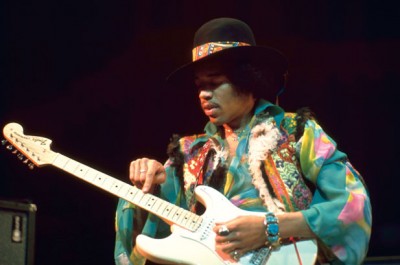 Looks like Sony is moving quickly to make their newly acquired Jimmy Hendrix music catalog start paying off.  They have inked a deal to bring Hendrix, who was previously on Guitar Hero over to Rock Band in form of the Album – Axis: Bold As Love. It will be added next week to the Rock Band Music Store. Axis, The Jimi Hendrix Experience’s iconic second studio album, was released in 1967, and includes the “If 6 Was 9,” “Castles Made of Sand,” “Little Wing” and “Bold As Love.” The songs will be available both as singles and as an album pack. Omitted is the spoken word/sound sculpture opening track “EXP” as it is not suitable for gameplay.Also available next week is “Valleys of Neptune,” the single from the new album of the same name, which was released March 9 on Legacy Recordings and features never before commercially released recordings. Legacy will also release this year deluxe CD/DVD editions of several of Hendrix’s most iconic albums, including Axis: Bold As Love. These 13 tracks join Hendrix’s “Fire,” which is already available on-disc for LEGO® Rock Band.  The full album will cost $19.99 or 1600 MS Points. I’ll be honest I’m tired of music games and haven’t played one in about 5 months, this may be enough for me to pick up my plastic instruments again.

(All tracks are original master recordings)