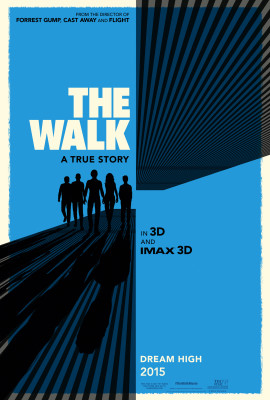 IMAX® 3D AUDIENCES TO EXPERIENCE “THE WALK” FIRST WHEN THE FILM IS RELEASED ON SEPTEMBER 30; WIDE RELEASE TO BEGIN OCTOBER 9

CULVER CITY, Calif., June 25, 2015  – Audiences at IMAX® 3D and other select theaters will have the chance to be the first to experience The Walk, the new motion picture event from Academy Award® winner Robert Zemeckis, when it is released exclusively in those theaters on Wednesday, September 30.  The film, which has also been chosen as the opening night selection of the New York Film Festival, will then enter wide release on October 9.

Twelve men have walked on the moon.  Only one man has ever, or will ever, go where The Walk will take moviegoers.   In The Walk, Academy Award® winner Robert Zemeckis, the master director of such marvels as Forrest Gump, Cast Away, Polar Express and Flight, again uses cutting edge technology in the service of an emotional, character-driven story.  With innovative photorealistic techniques and IMAX® 3D wizardry, The Walk is genuine big-screen cinema, a chance for moviegoers to viscerally experience the feeling of reaching the clouds.  It is also one of the rare live-action films that is a PG-rated, all-audience entertainment for moviegoers 8 to 80 – and a true story to boot.  It is unlike anything audiences have seen before, a love letter to Paris and New York City in the 1970s, but most of all, to the Towers of the World Trade Center.

Commenting on the announcement, Greg Foster, Senior Executive Vice President of IMAX Corp. and CEO of IMAX Entertainment, said, “We’re excited to be part of Sony’s exclusive release for The Walk, which was designed for and makes brilliant use of IMAX 3D. No one understands IMAX better than our longtime partner Bob Zemeckis – he is an artistic genius who uses all of his expertise to give audiences an edge-of-your-seat thrill that will make moviegoers feel like they are out on the tightrope themselves. We’re excited that our audiences will have the chance to see it first.”

IMAX is headquartered in New York, Toronto and Los Angeles, with offices in London, Tokyo, Shanghai and Beijing. As of March 31, 2015, there were 943 IMAX theatres (820 commercial multiplexes, 18 commercial destinations and 105 institutions) in 63 countries.

IMAX®, IMAX® 3D, IMAX DMR®, Experience It In IMAX®, An IMAX 3D Experience®, The IMAX Experience® and IMAX nXos®are trademarks of IMAX Corporation. More information about the Company can be found at www.imax.com. You may also connect with IMAX on Facebook (www.facebook.com/imax), Twitter (www.twitter.com/imax) and YouTube (www.youtube.com/imaxmovies).