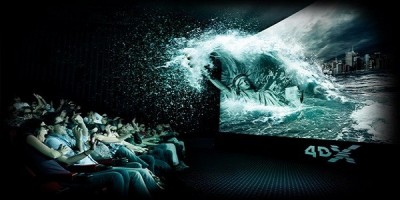 To refresh your memory 4DX is an immersive, interactive theater experience that makes you feel like you are in the movie. Seats move and shake, and the environment (rain, smells, etc) changes based on what’s happening in the movie.  I was in Vegas in March when South Korean company CJ4DPlex (they need a better company name) unveiled their partnership with Regal Cinema and AEG Live to bring their new 4DX theater technology to the US. The fruits of their labor is now upon us as Regal officially launches the technology on 4 screens this weekend in one of their flagship theaters – Regal Cinemas L.A. LIVE Stadium 14.

4DX, created by CJ 4DPLEX, is the world’s first and leading 4D technology-based movie experience. Headquartered in Seoul and with international offices in Los Angeles and Beijing, the company provides immersive cinematic experiences through 4DX auditoriums for worldwide exhibition partners along with 4DX codes of major Hollywood titles.

Each 4DX auditorium incorporates motion-based seating synchronized with over 20 different effects optimized by skilled editors of i-studio, the 4DX in-house editing team, maximizing the feeling of immersion within the movie.

Started in 2009, 4DX brought its very first – and the world’s first – 4D screen in Korea.  Since then, it has rapidly spread around the world, with partnerships in Mexico, Brazil, Chile, Peru, Venezuela, Russia, Hungary, Poland, Czech, the Philippines, Indonesia, Japan and – coming soon this summer – in the United States at the L.A. Live Regal Cinemas, in the heart of Los Angeles. As of the end of June 2014, 4DX has expanded to more than 16,000 seats in 109 theaters in 26 countries.