Comic-Con International returned to San Diego from July 20-23, 2017 with preview night on July 19 at the San Diego Convention Center.  As our writer Sheldon Wiebe gave updates on shows that were coming to the San Diego Comic Con (SDCC), our very own Michelle Alexandria, Tiffany D’ Emideo, and myself made our way to San Diego.  From its early beginnings as the Golden State Comic Book Convention in 1970, the convention has grown to an international sensation drawing fans from all over the world.

Several venues returned to Comic Con.  The 29th Annual Will Eisner comic Industry Awards, the “Oscars: of the comic book industry, was given for works published in 2016.  The 43rd annual Comic-Con masquerade with over 100 costumes re-created from various sources and genres along with completely original designs were on display.  The 41st annual Robert A. Heinlein Blood Drive was back after collecting 1,295 pints of blood last year. And of course Hollywood came too.

Conan O’ Brian hosted his show from San Diego while afloat on a yacht, Kevin Smith once again chatted with cast and crew from various TV shows. Actor Zachary Levi interviewed guests from such shows as Battlestar Galactica, Fear the Walking Dead, and Psych.

There were much to see for comic book fans and TV/movie goers.  TV shows once again treated their fans to pales, previews of the upcoming season, autograph signings, freebies, and experiences in the convention center and throughout the surrounding area.  The Walking Dead returned with zombies.  Netflix’s Stranger Things had walkthroughs with a Stranger Things t-shirt at the end.  Starz Outlander had autographed  posters and t-shirts.  To get the experience of sitting on a Game Of Thrones throne, one could ride a free bike ride in the area near the convention center.

Just as in years past, lines were bountiful.  The front of the San Diego Convention Center was filled with sleeping bags and people hanging out overnight as they staked out their spot for the morning’s events.  People stood in line for a chance to get a coveted comic book poster where only 150 copies existed.  Game Of Thrones fans did not mind waiting hours as lines wrapped around buildings to experience their beloved show.  Of course, Comic Con was not just for adults.  There were things for children to enjoy as well.  Nickelodeon’s Sponge Bob experience and Legoland playing areas were just one of the many things catering to the kids. To help one through the maze of Comic Con, a quick guide contained everything that you wanted to know for this year’s convention. 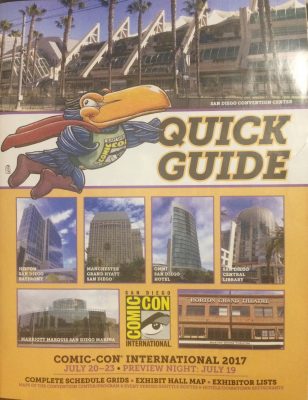 Comic Con is also known for its costumes and a treat for people watching.  Superheroes from DC Comics and Marvel comics made their way around the convention along with innovative and unique costumes.

Check back frequently on our site and the Eclipse Magazine youtube channel.  All the juicy interviews from behind the scenes at the Comic-Con press room will be posted.  Comic-Con in 2018 has already been scheduled for July 19-22 with preview night on July 18.  Live long and prosper, and see you next year!