Entertainment News for The Rest of Us
Tiffany D'Emidio
TV Reviews 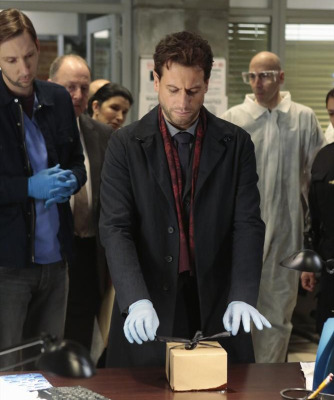 This weeks episode of “Forever” – The Frustrating Thing About Psychopaths, has Henry (Ioan Gruffudd) and Det. Jo Martinez (Alana De La Garza) chasing down a copycat killer recreating famous cases through history such as Jack the Ripper and The Black Dahlia. Oh and did I mention the return of Henry’s mystery fan? He’s back!

Once again Henry is contacted by the homicide division concerning a package delivered to the precinct containing a fresh and bloody human heart. Back at the lab, Henry and Lucas examine the heart trying to find evidence that will help lead them to the killer with little success. Detective Martinez has better luck and discovers through a missing persons report the heart belongs to a prostitute named Mary Kelley. Hmm why does that name sound familiar?

After a little digging through Mary’s financials, our team finds a credit card transaction for a hotel the victim visited the week prior. The doorman of the hotel confesses that he did see Mary there a few nights ago. While chatting with the doorman, Henry notices the hotel is next to a butcher shop named Dorset Meats and Sausages. This triggers a long lost memory for Henry from the beginning of his career as a medical examiner which just so happened to be Jack the Ripper who killed a series of prostitutes on Dorset Street in London. He realizes they are now chasing a copycat killer. Henry and Jo enter the butcher shop only to discover the dead body that belonged to the heart or Mary Kelley.

While the police investigate the crime scene, Henry receives a call from his mystery fan who is well aware of the dead girls story and taunts Henry about his past with the original Jack the Ripper murders. Henry becomes enraged and demands to know how the stranger knows about this murder that hasn’t even been investigated yet. Suspecting the mystery fan may in fact be watching him, Henry runs outside only to find a cellphone waiting for him.

Personally I would have dusted the phone for prints but that’s just me. Henry returns to the antique store to share with Abe his latest case and discloses the phone and details of the mystery man’s earlier conversation. Believing that the mystery man might be Jack the Ripper and unable to die, Henry devises a plan to catch the killer by planting a series of antique medical scalpel that would only be used by Jack the Ripper thinking the killer would seek it out to recreate the original killings.

Back at the lab Henry’s autopsy of Mary reveals the attention to detail the killer took trying to recreate the original markings of Jack the Ripper. However, what the current killer failed to know is that the original marking on Mary Kelley’s are was in the shape of a half-moon whereas the current Mary has a star. In the original case a newspaper reporter mistakenly identified the shape as a star and only someone who accessed the original news clippings would be privy to that detail.

Henry and Jo make their way to the library to find out that a man named Elroy checked out a copy of the news clipping and is currently in the library. As the scour the room a man notices them and makes a run for it. Detective Martinez chases after him through the library. Henry follows but is soon contacted by the mystery man and stops dead in his tracks. Pun not intended. The caller reveals that Henry missed something and that the killer isn’t finished with his homage to classic murder cases. Next up is The Black Dahlia.

The suspect is apprehended by Detective Martinez and brought back to the precinct. Turns out he’s quit the fan of Jack the Ripper checking out stacks of books on the mythology. When Jo shows him pictures of the victim he assures her that he isn’t a killer but instead a writer doing research for his graphic novel “Soul Slasher” which features stories of Jack the Ripper. When questioned why he ran from the police, Elroy explained that his comic garners him a lot of overly enthusiastic fans. In other words his fans are stalkers and he thought Henry and Jo were super fans.

Next up for our crime fighting duo is the Boston Strangler. A body is discovered in the park drained of all its blood with nylon stuffed in its mouth. Henry discovers a few clues that lead them to Brooklyn while Abe makes his way to an antique store to check out the details of a scalpel sold by a rival dealer named The Frenchman. Abe asks her to share the information of the sale but is refused though not before The Frenchman, who happens to be a woman, hits on Abe. When she refuses his request Abe steals her sales ledger and makes a run for it. Unfortunately, he is unable to decipher its contents because The Frenchman has entered the details in a sophisticated code.

After researching the “Soul Slasher” fan forums for clues to a possible suspect, Detective Martinez is led to a home in Brooklyn. The police enter the suspect’s home discovering an 18 year old named Devon on his laptop actively posting on the site. The smug teen is taken into custody but is confident they won’t charge him with murder and the cops are just grasping at straws. The actor really plays this part well because I wanted to slap the smug right out of him.

Devon’s parents confront the team insisting they have the wrong person and they’re going to get a lawyer to free their son. As they attempt to exit the police station Henry assures them that he has a ledger from an antique store where an antique scalpel was purchased that will prove their son is the killer. Jo gets pissed at Henry for not sharing this information with her and becomes livid when he reveals how he acquired the book to begin with. She leaves to speak with a judge about a warrant telling Henry to stay put before he can do any more damage. Of course he ignores her completely and decides to return the ledger to The Frenchman with the hopes of smoothing things over with her and getting her to cooperate with the police when they approach her to legally take a look at her books.

The Frenchman reluctantly agrees to help Henry and even describes what the man who purchased the scalpel looked like which floors Henry because he realizes that the killer isn’t Devon, the 18 y.o. kid but in fact a grown man. He attempts to leave the store when he steps outside and is violently stabbed by none other than Devon’s father, the real killer. Henry is left to die on the front stoop of the store while Devon’s father enters the store to kill The Frenchman. Henry struggles to regain his ability to move but makes his way back inside to help him colleague. He attacks the man and they struggle through the shop where the man ends up tossing Henry down a flight of steps breaking Henry’s back and immobilizing him. He returns upstairs to kill the store owner leaving Henry to die. As Henry lays on the basement floor dying, his new pal the mystery man appears letting Henry know that it wouldn’t do him any good for the police to discover his body there in its current state so he slits Henry’s throat insisting that it’s to help Henry.

Meanwhile, Detective Martinez arrives at the antique store discovering Devon’s father as the killer and is forced to shoot him multiple times effectively killing him and saving the store owners life.

They return to the precinct where a heavy hearted Detective Martinez reflects on the events of the evening and is assured by her Captain that she did what needed to be done but that doesn’t make it any easier. Jo and Henry make their way to the local bar to commiserate over an expensive glass of scotch.