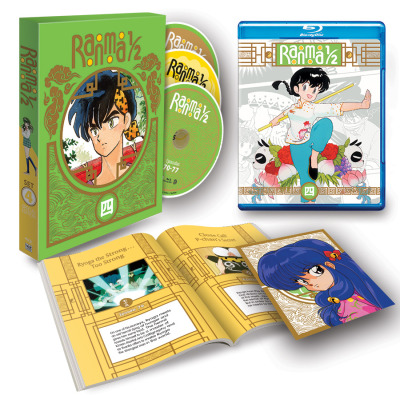 The fourth in a series of limited edition Blu-ray sets for gender-bending anime Ranma ½ will be released by VIZ Media on December 9th. The set will also be available in the standard DVD format.

For further details – storylines, extras and such, follow the jump.

Arriving in time for the holidays, the RANMA ½ Limited Edition Blu-ray Box Set Set 4 carries an MSRP of $54.97 U.S. / $63.99 CAN. The set contains Episodes 70-92 on 3 discs, presented in full 1080p High Definition resolution with the series’ original, un-cropped 4:3 aspect ratio. Bonus features include clean openings and endings as well as series trailers. The set comes in a gorgeously illustrated chipboard box with embossed foil stamping.

The RANMA ½ Standard Edition DVD Set Set 4 also features 23 episodes presented in crisp HD with the original, un-cropped 4:3 aspect ratio, and bonus features that include clean openings and endings and trailers. The Standard Edition DVD set is available with an MSRP of $44.82 U.S. / $51.99 CAN.

The mayhem continues in the latest RANMA ½ home media release!! Shampoo visits Ranma, bringing a souvenir bell from China along with a Phantom Cat, who’s in search of a bride! Ranma will have to endure his fear of felines in order to defeat the Phantom Cat. Then, after a series of certain events, Ryoga becomes the strongest martial artist in the world. After that, Kuno gets his hands on a secret sword call the “Mangamaru,” which grants the user here wishes, and one of them is to have a date with the Pigtailed Girl! Finally, a mysterious foursome has come from China in search of the legendary Dragon’s Whisker and will stop at nothing to get it. But what is the Dragon’s Whisker and what does it have to do with Ranma?