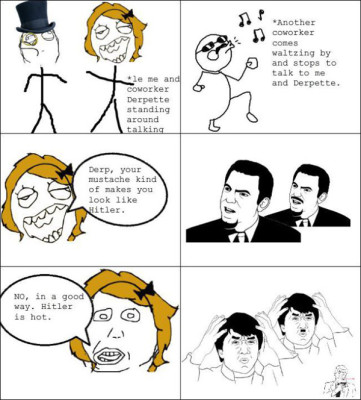 Any short comic that uses pre-made cartoon face or the rage face is known as the rage comic. Usually, this expresses rage or any simple activity. These have spread much way similar to the internet memes along with others that originated through this medium. These have been characterized as the standardized and accepted form of online communication. Famous rage comics were attributed to be mediums for humorizing shared experiences while others were used for teaching English as foreign language. Just check out some rage comics online and let down your funny side.

Initially, the first rage comic was posted via 4chan/b/random board back in 2008. It already has a simple 4-panel strip presenting the anger of its author while at the toilet. This post was quickly modified and reposted with the other user making new characters and scenarios. Even though this was used with other websites like Cheezburger, Reddit, ESS.MX and 9 GAG, rage comic success was largely from 4chan. The notable site for rage comics is Ragestacge, which is also famous from Spartz Media sites and devoted to rage comics with over 1,900 pages as of January 2014.

This is a kind of rage comic drawn to display the real life scenarios in a simplistic and funny way. Rage comics first started back in 2008 and became popular in 2009. Several faces for real life situation emerged as forever alone, smile, and others. Check out some rage comics that became popular:

Having the popularity of rage comics and the necessity of easier creation, various rage makers were developed. The famous creators are Dan Awesome’s ragemaker and Memebase Ragebuilder. People who loved rage comics saw how special these were since the expressions are meant for showing universal emotions of different degrees under a wide variety of situations.