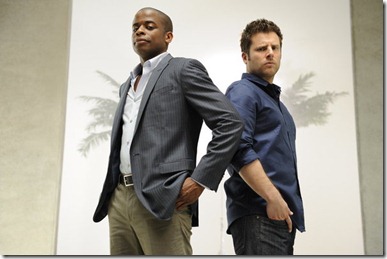 USA Network is asking fans of their long-running hits, Psych (Psych-Os), to come up with the tag line for the show’s new season, which premieres on the network on Wednesday, February 27m 2013 at 10/9C.

If you think you can top such previous Psych tags as ‘Fake Psychic. Real Detectives.’ or ‘To Predict and Serve’ – or even ‘Solving Crime is a Serious Business, Sort Of’ – follow the jump to the official press release and learn how you can submit your ideas.

IN A NETWORK FIRST, USA INVITES “PSYCH” FANS TO UNLEASH THEIR CREATIVITY
BY CRAFTING THE TAGLINE FOR THE SEASON SEVEN MARKETING CAMPAIGN

USA is rewarding its loyal fan base by giving them an unprecedented invitation to create a brand new tagline and have their words immortalized in the show’s marketing campaign as PSYCH returns for its seventh season on Wednesday, February 27, at 10/9c. Starting today, November 30 through December 23, Psych-Os can visit the Psych Tag iiit app on USANetwork.com or the show Facebook page to submit, review and rank taglines.

Fans can insert their own tagline right onto the official season seven poster online, share their masterpiece in the PSYCH gallery, and rate their favorites. The entries will be narrowed down to seven finalists – reflecting the seventh season – with the voting taking place on December 31, 2012 through January 4, 2013, with the fan favorite announced in January. Previous PSYCH taglines have included “To Predict and Serve,” “Solving Crime is a Serious Business, Sort Of,” and from season one, “Fake Psychic, Real Detectives.”

While waiting for PSYCH’s return, fans can play Emmy-nominated HashTag Killer, the seven-week murder-mystery social game which pulls fans into the storyline and the plot as they are task with utilizing multiple platforms and social outlets to help “Sean” and “Gus” solve the case of the “Hashtag Killer.” Unfolding in real time, users can pull in their Facebook friends to play along and acquire clues and affinity reward points in return for their engagement with text messages, video, audio feeds, interactive crime scenes and mini-games.