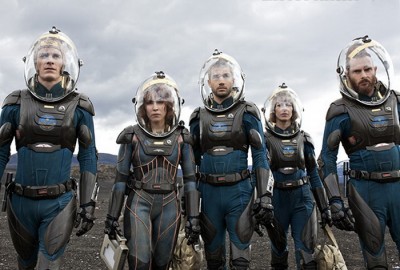 Now we have Prometheus a movie that is set in the Aliens universe, but not really.  There are a lot of similarities in terms of look, feel, tone, but the connection that fans may be looking for really don’t seem like its there. You can watch this movie without knowing anything about the Aliens world. It has been awhile since I watched my Aliens Blu-ray collection, so I walked into this sort of “cold.” 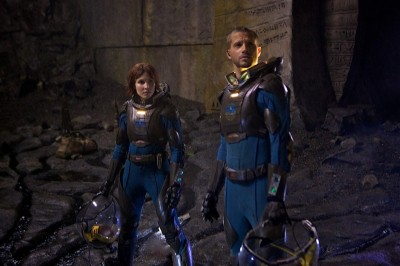 While intensely watchable and at times actually engrossing about halfway through this exercise the sinking feeling of pointlessness sets in. The movie asks “big” questions, or at least claim to be, but it is more shallow pop psychology.  “What would you do if you could meet god and ask him why he created you?”  Ok. Yeah, and?  The movie just poses the question, but there really is no debate about what would be asked or how it would impact the person asking.

The 3D for a change does not hurt the movie. I still do not buy into the B.S. that 3D is only good for “depth.” I want my 3D to pop out at me and be over the top like Piranha 3D or the Final Destination movies, I don’t want pointless “depth.” The opening sequence, which is incredibly stupid and actually pointless, is beautifully filmed in 3D. The first time we get a full shot of the Prometheus is awe inducing, but these nice 3D moments are few and far between.

As someone who isn’t a fan of the Alien franchise, Prometheus feels like a competent, but pale imitation of those far superior films.

26 thoughts on “Prometheus is no Pirahna 3D! Michelle’s Review!”