Prey is a new procedural series with a twist – its six-episode first season follows Detective Sergeant Susan Reinhardt on two cases as she hunts down a colleague who is wanted for murdering his wife and child, and figures out why a prison officer with a spotless record is helping an inmate escape – while ‘coping with her own demons’.

New York – February 3, 2016 – The gripping BAFTA-nominated series, Prey, plays out as two three-part stories that straddle two intense cases – with down-but-not-out Detective Sergeant (DS) Susan Reinhardt (Rosie Cavaliero, A Young Doctor’s Notebook, Little Dorrit) at the center of it all – fighting to unravel the truth, while struggling to cope with her own demons. After her failed marriage, Reinhardt seeks redemption in excessive hours of work and finds comfort by eating her feelings. Both her cases point to corruption in the UK law enforcement, first she’s tasked with catching colleague Detective Constable (DC) Marcus Farrow (John Simm, The Village, Life on Mars, State of Play), a man on the run, who will do things he never thought possible to clear his name for the sake of his family. Next she must resolve why an exceptional prison officer, Dave Murdoch (Philip Glenister, Mad Dogs, Ashes to Ashes) is helping an inmate escape. The turmoil drives Reinhardt into a high-stakes game of cat and mouse and the outcome may change her life forever. BBC AMERICA’s Prey premieres Thursday, February 25, 10/9c.

DC Marcus Farrow, a well-liked detective, investigates a dead body found in the outer parts of Manchester, leading him to a seemingly forgotten case with loose ends. Just as he begins to scratch the surface of the case, he finds his wife and son murdered with all evidence pointing to him being guilty of the crimes committed. Arrested and charged, it seems as Farrow’s fate is sealed, but when he gets the opportunity to escape, he seizes it. Filling in as Senior Investigating Officer (SIO), Susan Reinhardt is assigned with finding Farrow and bringing him back to jail, and so begins an intricate chase for a detective who now is a criminal on the same streets he used to police.

As a wanted killer, Farrow has few allies – the only people he can trust is his best friend Detective Inspector (DI) Sean Devlin (Craig Parkinson, Misfits, Whitechapel) and boss Detective Chief Inspector (DCI) Andrea Mackenzie (Anastasia Hille, You, Me and the Apocalypse, The Missing). The clock’s ticking, but will Farrow evade capture long enough to find the evidence that will clear his name, or will Reinhardt get to him first?

Reinhardt’s second case follows Dave Murdoch, a prison officer at HMP Ravenhill Prison, who receives phone call with an ultimatum that turns his life upside down. His pregnant daughter, Lucy, has been kidnapped and in order to get her freed, he must help an inmate, Jules Hope (MyAnna Buring, Ripper Street, Downton Abbey), escape and deliver her to the man holding Lucy captive. The same day, Reinhardt, who is now back to being a plain, old DS after having been passed over for promotion, finds the body of Daniel Hope – Jules Hope’s brother. Can it be a coincidence that his sister goes missing on the same day he’s found dead? And why is Murdoch – a popular, hard-working man with an unblemished career – helping her escape? While Reinhardt searches for clues for the case, Murdoch desperately seeks the truth surrounding his daughter’s disappearance and tries to avoid the police that are inching closer each day. Solving this case can make Reinhardt’s career and ultimately provide her with a fresh start, but in order to do so, she must first catch her prey.

Prey is written and created by Chris Lunt. The series is directed by BAFTA-winner Nick Murphy (The Awakening, Occupation) and Lewis Arnold (Misfits, Humans). The producer is Tom Sherry (Scott & Bailey, New Tricks) and the executive producer is Nicola Shindler (Happy Valley, Last Tango in Halifax). Prey is a Red Production for ITV and is distributed by BBC Worldwide. 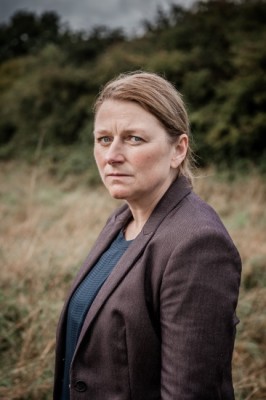 DS SUSAN REINHARDT (Rosie Cavaliero) is desperately trying to overcome her failed marriage by burying herself in work. Although she knows she shouldn’t, she can’t help but to spy on her ex-husband and his new wife, every chance she gets. Feeling that her career is at a stand-still, she sees her chance to advance and turn her life around when she’s tasked with solving two major cases. 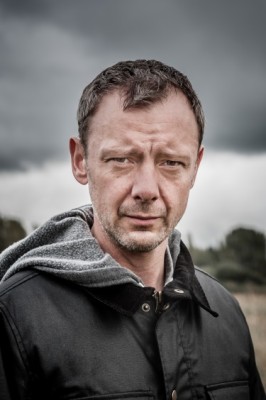 DC MARCUS FARROW (John Simm) is a hardworking detective and devoted family man whose world is turned upside down when his wife and son are found dead and soon after he realizes he’s being framed for their murders. Shell-shocked by the turn of events in his life, Farrow is forced to act swiftly. But he’s willing to go to any lengths necessary to prove his innocence and unearth the truth.  On the run from his colleagues, Farrow has an advantage – he knows the methods they’ll use to try to find him – but can he outsmart DS Susan Reinhardt? 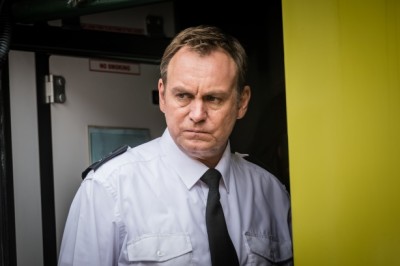 DAVE MURDOCH (Philip Glenister) is a reliable and dedicated prison officer. Recently widowed, his daughter Lucy means the world to him. Although Murdoch doesn’t see eye-to-eye with Lucy’s boyfriend, Alan, he’s genuinely happy that they’re expecting their first child. When Murdoch finds out Lucy’s been kidnapped, he’s driven to find her at any cost – even if it means risking his own life and freedom.

When DC Marcus Farrow looks into a seemingly forgotten case, he has no idea about the chaos and heartache that will soon follow. When he’s framed for the murder of his wife and child, he has no choice but to make an escape to clear his name. Farrow does everything he can to get to the truth but with Acting Senior Investigating Officer (SIO) Susan Reinhardt in hot pursuit, will he be able to clear his name before he’s caught? Episode one premieres Thursday, February 25, 10/9c on BBC AMERICA.

The widespread hunt for DC Marcus Farrow gains momentum when Acting SIO Susan Reinhardt receives a tip pointing to his whereabouts. But just when Reinhardt thinks she has finally nailed Farrow, he manages to escape once again. Farrow discovers some shocking truths about an old case and believes someone close to home may know something about the death of his wife Abi and son Max. Episode two premieres Thursday, March 3, 10/9c on BBC AMERICA.