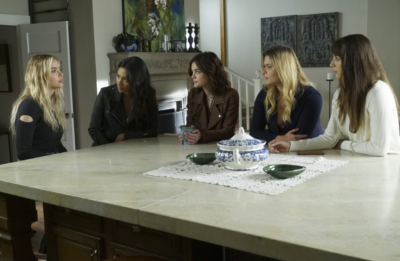 Freeform will bid farewell to hit series Pretty Little Liars with a three-hour event – the two-hour series finale and a one-hour tell-all.

PLL’s final ten episodes are scheduled to air in April, 2017 – will and continue to bring back fan favorite characters as it has done during the first half of the season. A PLL wedding is also in store.

The tell-all, which will premiere immediately after the two-hour series finale, will allow viewers the chance to digest all the drama that happened in the finale alongside the main cast and I. Marlene King. Burning fan questions will be asked and answered, and the audience will get the all the scoop on the ins and outs of A.D. and the #PLLEndGame. The after show will serve as a retrospective celebration of the past seven seasons and as a way for the #PLLSquad to say goodbye to the beloved drama.

It was announced in August that the final 10 episodes will air in April 2017. Season seven will continue to be filled with homecomings and reunions, bringing back old characters as it has already done in the first half of the season, including Wren Kingston (Julian Morris), Pastor Ted Wilson (Edward Kerr), Jenna Marshall (Tammin Sursok), Paige McCullers (Lindsey Shaw) and Sydney Driscoll (Chloe Bridges). A #PLLWedding for one of the Liars is also in store for the latter half of the season.

Part of the Disney|ABC Television Group, Freeform connects to audiences and goes beyond entertainment with bold original programming and immersive social engagement. The network delivers a unique mix of quality original and acquired series, plus fan favorite movies and the holiday events “13 Nights of Halloween” and “25 Days of Christmas.” The Freeform app is a service that allows viewers with participating TV subscription services access to 24/7 live viewing of the network, as well as continued on-demand access via a wide array of devices.