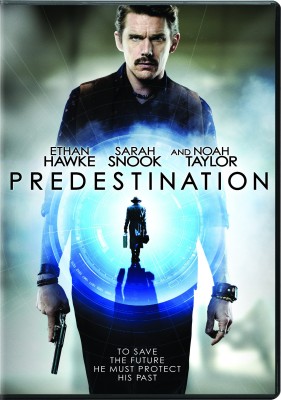 A guy walks into a bar. The bartender asks what he’ll have. ‘Old Underwear. Leave the bottle,’

It’s a quiet night and the two begin to chat. When he’s about halfway through the bottle, the guy says, ‘I’ll bet you the rest of this bottle that I’ve got the best story you’ve ever heard.’ The bartender is skeptical, but suggests that, if the guy’s story is so good, the bet should be a full bottle. If the guy loses, he adds twenty to the tip and they’re square. The guy agrees.

The bartender finally says, ‘Okay, what have you got?’ The guy looks him in the eye and begins…

‘When I was a little girl…’

You might remember the Spierig Brothers from their unique take on vampire movies, Daybreakers. For their next trick, they’ve adapted one of the greatest time travel stories ever written – All You Zombies, by Robert A. Heinlein – into a movie and called it Predestination.

Co-star Sarah Snook won the Australian equivalent of the Best Actress Oscar® for her role, The Unmarried Mother.

Ethan Hawke plays a Temporal Agent on the trail of The Fizzle Bomber – a madman who’s set off a series of bombs that have claimed an escalating number of victims.

Snook plays Jane Doe, an orphan who was left on the steps of an orphanage. Not being particularly beautiful or sweet, she watches as other kids get adopted ahead of her. When she turns eighteen, she sets out into the world with a wealth of knowledge but no experience.

A series of events leads her to try out for a government agency that seeks females to send into space with astronauts for long haul missions and Jane finds the training bracing. An unfortunate encounter – a fight, really, with one of the other girls leads to the discovery that she’s ‘different.’

Eventually their paths cross; a classic country tune that’s a bit on the nose plays in the background, and there is a final confrontation between the Temporal Agent and the bomber. How that plays into my opening above is what makes the movie delightful.

That’s all I can tell you about the setup of Predestination without giving away spoilers (Sony apparently couldn’t figure out how to put copy on the DVD’s cover without giving away a key plot point, so don’t read the cover before you watch the movie at least once).

Predestination was both written and directed by the Spierig Brothers (as was Daybreakers) and they are faithful to the classic Heinlein tale in essence. They play with paradox, crossing time streams and different points of view of a series of events – all leading to a conclusion that is both unexpected and inevitable.

Technically, the film is beautifully paced and shot. Considering all the time-hopping, the editing couldn’t be better. Every second is essential to the storytelling and Predestination is one heckuva story well told.

Acting-wise, Hawke is dependably solid but this is Snook’s movie. She is called upon to really stretch – in more ways than most actors are ever required – and delivers extremely well.

I can’t imagine the budget for the movie could be anywhere near what was available for Daybreakers, but Predestination looks like a much more expensive movie. The sets reflect different eras; the equipment is cleverly designed and the visual effects are super.

I loved Daybreakers but have to say that I think Predestination is even better. It’s smart, cool and fun. At ninety-eight minutes, it’s just enough to tell its story and get off the stage. Even better, it holds up under repeat screenings. If you love time travel movies you will love it.

Bonus features are limited on the DVD: Bloopers; Predestination: A Journey Through Time Featurette