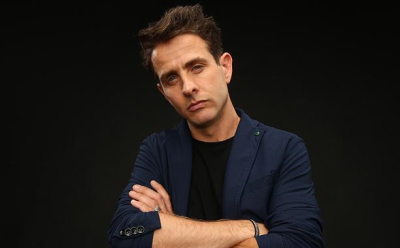 Pop has expanded its development slate with a half comedy from Joey McIntyre that is loosely based on his life; Celebrity Escape Room (working title) a live-action game show where two celebrities are locked in identical rooms with a friend and can only escape by using their pop culture knowledge, and I Watch It With My Girlfriend (working title), a look at female-skewing TV favorites from a male perspective.

“We are thrilled to be developing three new projects that feature remarkable talent, closely align with our brand and are inspired by fan-driven concepts,” said Paul Adler, Senior Vice President, Original Programming and Development, Pop. “Our programming continues to celebrate the excitement of fandom by covering the next big thing in pop culture.”

Pop’s projects in development include:

THE JOEY McINTYRE PROJECT is a half-hour comedy featuring Joey McIntyre as a fictionalized version of himself. The show catches up with Joey in an attempt to branch out from his New Kids on the Block fame and continue towards his goal of becoming a serious actor. Joey is given the offer to host his own daily talk show at an up-and-coming cable network, something he’s not sure is the right move. Finally relenting, Joey finds that he must navigate the absurd behind-the-scenes world of talk show development as he interacts with a revolving staff, crazed network executives and celebrity guests – and balance all of that with his own hectic family life. THE JOEY McINTYRE PROJECT is produced by T Group Productions and executive produced by Donnie Wahlberg, Jenny McCarthy, Joey McIntyre, Jenny Daly, Paul Greenberg and Tim Gibbons.

Based on the hottest new craze in live-action gaming, CELEBRITY ESCAPE ROOM is a high-intensity, totally immersive pop culture challenge. Two celebrities and their friends compete by getting locked in identical rooms, and the only way out is to use their pop culture knowledge and work together to unlock the exit. With room themes ranging from zombie apocalypse to a totally tubular ‘80s teen dream, viewers play along as the two celeb teams hilariously stumble through a series of clues, puzzles and red herrings until they unlock the key to their freedom. The first team to escape wins. The series is executive produced by Neil Regan, Joel Karsberg and Cem Yeter of Zodiak USA.

I WATCH IT WITH MY GIRLFRIEND (WORKING TITLE)

Covering everything from “Housewives” to “Scandal,” I WATCH IT WITH MY GIRLFRIEND offers fresh and hilarious male perspectives on female-skewing TV favorites. Host comedian James Pumphrey (“Upright Citizens Brigade”) – a self-proclaimed guy who knows nothing about sports, but can proudly recite five seasons’ worth of “Bachelor” contestants – is joined by a rotating panel of pop culture experts ready to salute the best and worst of “chick TV.” I WATCH IT WITH MY GIRLFRIEND is produced by Den of Thieves, executive produced by Evan Prager, Jesse Ignjatovic, and James Pumphrey and co-executive produced by Jared Morell and Jordan Barrow.

Pop on the Web: poptv.com