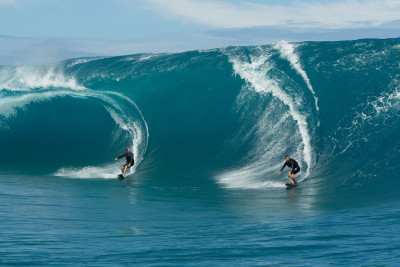 Point Break takes the basic plot and characters from the Patrick Swayze-Keanu Reeves cult classic and fashions them into a gorgeously shot, intense thriller that hides its characters’ one-notedness behind brilliant cinematography and ridiculously cool stunts.

Johnny Utah (Luke Bracey) is an extreme sports legend but a stunt gone wrong resulted in the death of his best friend. Following that event, he went into hiding, coming up in the present as an FBI agent-in-training – a trainee that his instructor, Agent Hall (Delroy Lindo) doesn’t think has what it takes. At least until he comes up with a workable theory as to why a series of big money capers might be happening – and why they might be happening.

In a nod to the before-it-was-hip-to-care-about-the-planet original, Utah surmises that these very capers were pulled off by the same crew because they were attempting to achieve a series of eight sporting challenges to achieve enlightenment.

When no one else can come up with anything better, Utah gets to go into the field on a probationary basis, under the watchful eye of Agent Pappas (Ray Winstone). Utah finds his way into the group through an attempt to surf a monstrous wave and failing – but being saved by Bodhi (Edgar Ramirez). 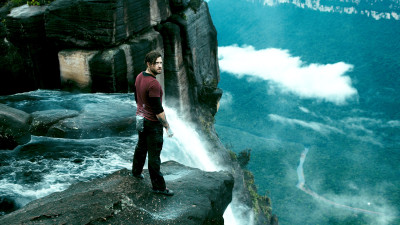 Director Ericson Core captures some amazing stuntwork against some of the world’s most amazing locations (like Venezuela’s Victoria Falls – the highest unbroken waterfall in the world) and the results are breathtaking.

The eight challenges are the basis of the film being shot in a number of locations and the cinematography really makes the most of the locations – from Victoria Falls to the highest mountains of Europe. In an enhanced presentation theater (thanks to Star Wars, this won’t be seen in IMX, I wouldn’t imagine), the stuntwork and cinematography alone would be worth the price of admission.

Unfortunately, none of the characters is well written – not even Utah and Bodhi (Teresa Palmer is completely wasted as the love interest) – and none of the actors involved – save Lindo and Winstone –surmount the problems with the script.

Point Blank sacrifices the fun of the original for an intensity that is not supported by its cast – but even so, the stunts and camera work make it worth seeing on a big screen, if only just.

Photos by Rainer Bejo/Courtesy of Warner Bros. and Alcon Entertainment.