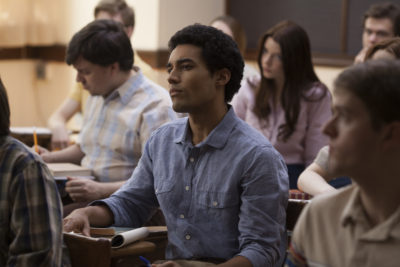 One of the most acclaimed films at this year’s Toronto International film Festival, Barry, follows the young Barack Obama (Barry to his friends) as he moves to New York City in 1981 for his junior year at Columbia University.

Barry will be available on Netflix, globally, on December 16th. Check out the trailer following the jump.

A NETFLIX ORIGINAL FILM AND ONE OF THE MOST TALKED ABOUT CRITICALLY ACCLAIMED FILMS AT THIS YEAR’S TORONTO FILM FESTIVAL – BARRY – AVAILABLE TO MEMBERS GLOBALLY ON DECEMBER 16, 2016

Beverly Hills, CA – October 20, 2016 – As the United States transitions from one presidency to the next, and a nation examines issues of diversity and acceptance, the Netflix original film Barry resonates. On December 16, 2016, millions of members in 190 countries around the globe will have a chance to enjoy this powerful artistic exploration of a pivotal year in the life of the future 44th President of the United States, during which he developed the foundations for his views on race, government, and what it means to be American.

A young Barack Obama, known to his friends as “Barry,” arrives in New York City in the fall of 1981 to begin his junior year at Columbia University. In a crime-ridden and racially charged environment, Barry finds himself pulled between various social spheres and struggles to maintain a series of increasingly strained relationships with his Kansas-born mother, his estranged Kenyan father, and his classmates. Barry is the story of a young man grappling with those same issues that his country, and arguably the world, are still coming to terms with 35 years later.