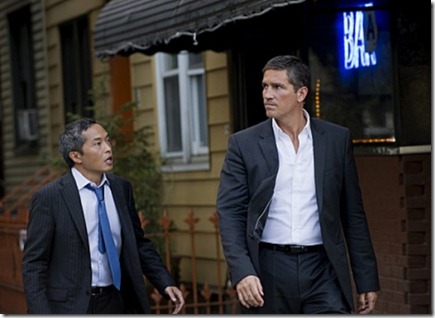 The Contingency, the second season premiere of Person of Interest (CBS, Thursdays, 9/8C) finds the mysterious Root keeping Harold Finch close by unusual means and Reese trying to keep an Asian-American accountant from being killed by his employers – the money laundering, corporate operation of a white supremacist group – while trying to rescue Finch.

Even though the first season finale of POI had Finch (Michael Emerson) being spirited away at gunpoint, it doesn’t take long for Root (Amy Acker) to establish a means of prevent him from escaping through other, less forceful means. Part of the fun of The Contingency is the back and forth between Root and Finch. They are alike in some surprising ways – and fuelled by completely different motivations.

Meanwhile, Reese (Jim Caviezel) tries to persuade The Machine to help him find Finch – but it wants him to continue saving people. In this case, the person in trouble is Leon Tau (Ken Leung, Lost) – an accountant who has stolen eight million dollars from the corporate arm of a white supremacist group where he had been investing their illegal income. Now they want their money back or they’ll kill him. Reese is led to him by The Machine, so he thinks Leon is a lead, but instead, he’s just the latest number. Reese is the contingency plan to carry on Finch’s work – which doesn’t sit too well with him. 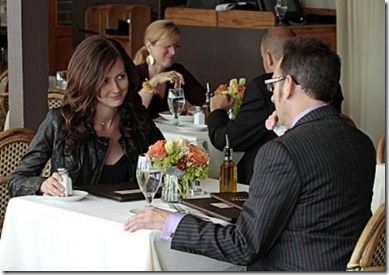 In the hope that they can help, Reese has Detective Fusco (Kevin Chapman) keep an eye on Leon, while he has Detective Carter (Taraji P. Henson) investigate the death of former intelligence agent Alicia Corwin, whom Root killed before taking Finch captive. The Corwin murder leads into another whole series of events that suggest a conspiracy of some proportion.

Running as counterpoint to these arcs is a series of flashbacks showing Finch establishing The Machine’s awareness and road testing it – with surprising, and occasionally humorous results. This ties in with an intriguing theory voiced by Root.

Thanks to some very carefully thought out exposition in the first season – and some increasing pace leading into the season finale – The Contingency threads all three arcs into a fascinating tapestry of cause and effect; action and stillness.

The Root/Finch arc raises some very interesting questions – like why Finch really created The Machine; whether it is a living intelligence, and what Root’s motivations might be. There’s a tie-in between Root and… but that might be TMI…

The conspiracy arc may or may not be tied into events from last season, but my money is on it being a continuation because of the late Ms. Corwin’s efforts to find out what Finch was up to. In any event, it’s given just enough time to create intrigue, which is to say that it doesn’t overstay its welcome. By the time it’s time to deal with it, it will undoubtedly be worth being the main focus over several episodes.

The balance between Reese’s efforts to find Finch and Leon’s problems leads to some serious action (as usual), though not all of it occurs onscreen – which leads to some strangeness. We also get to see Reese encounter someone whose butt he might not be able to kick – and make an unusual new friend.

Overall, then The Contingency is a taut, thriller from teaser to tag – and sets up what is sure to be an intelligent, occasionally thought provoking, witty arc as Reese tries to balance being the contingency plan with finding Finch. Person of Interest is rapidly becoming one of the better riffs on the standard procedural on network television and this episode is one of its best.