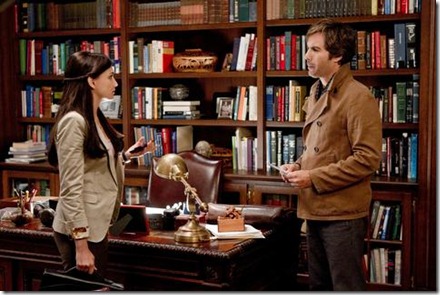 Perception (TNT, Mondays, 10/9C) finds a unique way to play off the standard procedural. In this case, the consultant to the FBI is Dr. Daniel Pierce, the man who wrote the book (well, actually four of them) on forensic neuroscience – and a paranoid schizophrenic.

As Pierce (Eric McCormack) points out to his university class in neuroscience, we react to events in our dreams in exactly the same way as we would if those events were taking place in the real world. Whether in dreams or awake, reality is what we perceive – in other words, for all intents and purposes, ‘reality is a figment of the imagination.’

Because he’s painfully aware of the problems that can arise from his condition – and because he refuses to go back on his meds (they made him unable to focus and, therefore, work) – Pierce has devised a method for dealing with it: a combination of sessions with a therapist, puzzles and music.

When a former prize student, Kate Moretti (Rachael Leigh Cook), now with the FBI, asks him to consult on a murder that seems likely to be connected to a series of terrorist threats, the scale of the puzzle draws him in. The murder is that of a senior executive at a pharmaceutical firm, who was apparently murdered by his wife for the insurance money.

The case leads Moretti and Pierce into a maze of unexpected twists and turns that make it difficult to tell what is actually real.

To establish Pierce as a character, the premiere opens with him giving a lecture to one of his classes that leads to the ‘reality is a figment of the imagination’ comment. We follow him through a post-class encounter with a female student in which he is prickly and abrupt and meet his assistant, Max Lewicki (Arjay Smith) – which later leads to our meeting Pierce’s friend and boss, Dr. Paul Haley (LeVar Burton), a dean at the university.

Unlike a lot of procedurals, Perception is firmly grounded in character from the get-go. Well before the premiere is over, we learn that Pierce occasionally has hallucinations – frequently to remind him of things that he has seen or heard, but hasn’t properly processed. It’s like the way our dreams are frequently the way one’s subconscious processes the events of the day, except his dreams happen while he’s awake.

McCormack does a remarkably good job of making Pierce – with all his eccentricities and issues – an engaging (and engaged) amateur sleuth. Cook is solid as the FBI agent who tends to overcompensate for being short and pretty by taking down bad guys by jumping off second story balconies, and being willing to persuade an admittedly crazy (yup, he really admits to it) neuroscience professor to consult on her most peculiar cases.

Colin Cunningham (the amoral chef/thief/skitter hunter on Falling Skies) turns in an excellent performance as a worker at the pharmaceutical company and Kelly Rowan is delightful as Pierce’s best friend and intellectual equal, Natalie Vincent.

Before the case is finally, truly and completely closed, the premiere has gone from a simple murder to corporate conspiracies and back to a personal level; from Pierce finding a new and complex puzzle, to shaking up the lives of both series leads. We also get a lot of exposition on the subject of mental health – some ponderous, most not. In fact, the series is shaping up to become a combination of A Beautiful Mind and a reverse twist on Bones.

After screening the four episodes that TNT provided for critics, I can say that any rough patches shown in the pilot (a combination of needing to provide a great deal of exposition and hitting the show’s mental health aspect a bit too hard) are pretty much smoothed out by the second episode.

The series premiere was written by the show’s co-creators, Ken Biller and Mike Sussman, and directed by Alan Poul. Despite the aforementioned rough patches, Perception’s premiere is a smart, well-paced entertainment. Don’t let the fact that it Says Stuff deter you from checking it out.