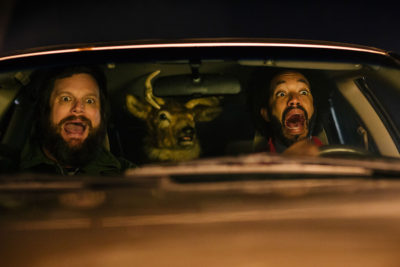 Premise: a reporter assigned to do a puff piece on a support group for people who have survived experiences with aliens discovers that it’s possible he might have actually be one of them.

People of Earth (TBS, Mondays, 9/8C) is unexpectedly fresh and smart – more of a dramedy than a pure comedy series.

Ozzie Graham (Wyatt Cenac, The Daily show) is sent to Beacon, NY, to do a piece on Starcrossed – a support group for survivors of alien encounters.

The group meets in the basement of Our Lady of Sorrows, the local Catholic church and the group is not immediately Impressive – they spend most of the meeting he attends arguing about which alien species (the Reptilians, The Greys, or the Whites) is superior. 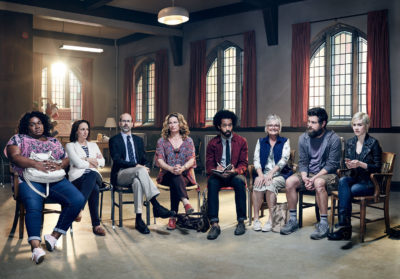 The group was co-founded by Gina Morrison (Ana Gasteyer, Suburgatory), a former New York psychiatrist, and Gerard ‘Gerry’ Johnson (Luka Jones, The Campaign, Up All Night), a self-proclaimed ‘alientologist’ who’s never actually had an encounter.

After the meeting, though, Ozzie discovers that his ongoing nightmare of hitting a deer (apparently near Beacon – home of the most alien encounters on the East Coast) is a classic example of a ‘cover memory’ generated to replace memory of such an encounter.

Cenac has a great presence as the wry, dry and focused Ozzie – who’d rather be getting back to ‘important’ stories but whose boss, Jonathan Walsh (Michael Cassidy, The Magicians), wants him to do a follow up.

Things take a bad turn when Walsh prints the unfished draft of Ozzie’s first piece – without the changing names or locations.

Ozzie’s arrival and the following upheaval – the group does not take kindly to being outted – leads to a more investigatory approach being taken in regard to the members of the group’s experiences. This makes things complicated… 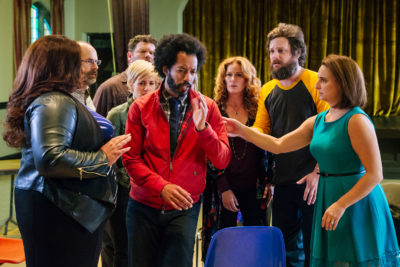 As with alleged abductees in the real world, the Starcrossed group is varied across income and class: Kelly Grady (Alice Wetterlund, Silicon Valley), a part-time receptionist at a funeral home and Chelsea Wheeler (Tracee Chimo, Orange is the New Black), a bored upper middle class housewife have apparently had encounters with the same White Alien; Richard Schultz (Brian Huskey, Veep, another Period), VP at a firm that manufactures jacks for Ethernet cables and Yvonne Watson (Da’Vine Joy Randolph, Selfie), a postal worker, both had encounters with a Reptilian, and Margaret Flood (Nancy Lenehan, Veep), a retired widow who recalls a Reptilian who told her, ‘Don’t get weird.’

Then, to add to the experience – giving the audience more knowledge than Ozzie – we meet Jeff the Grey (Ken Hall) – whose complaints about the incompetence of everyone else (regardless of species) is a fun running gag; and Don the White (Bjorn Gustafsson) looks like an elf from Lord of the Rings and seems new to the whole abducting of humans thing, and Kurt, an initially laid back Reptilian who rapidly loses his cool (gets weird), and has one of the best bits in the first two episodes.

Finally, there’s Father Doug (Oscar Nuñez, The Office, Benched), who has to deal with the group as their much put upon landlord and Chelsea’s not altogether chaste attentions. Nuñez brings a gift for registering a mix of complete bewilderment with genuine concern to the increasingly put upon parrish priest. 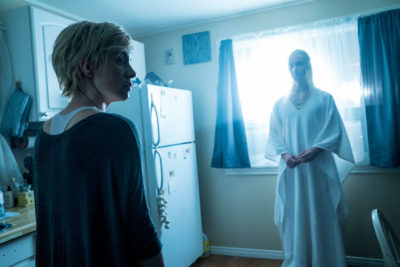 Created by Dan Jenkins, People of Earth is both compellingly real – its group sequences are like AA meetings gone just a bit off and more than a little absurd in a good way.

Cenac is a real find as the series lead. He’s great with line; can shift from cool to extreme frustration on a dime, and generally makes everyone else better in their scenes with him. Gasteyer, of course is a veteran at playing absurdity as real and reality as absurdity, so she’s right at home as Gina.

Jones is the most immediately accessible as Gerry – he’s both really passionate and super needy (and one of the best gags in the show is that despite never having had an encounter, he’s pretty much spot on in his assessment of the aliens’ hierarchy).

People of Earth is a joyful burst of genuinely grounded absurdity. That sounds like a contradiction in terms, but it really isn’t.