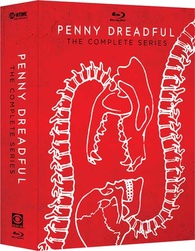 Showtime’s Penny Dreadful is a series about fighting one’s demons – whatever they may be – using a combination of characters from great literature and original ones.

The series opened as a tale of a man trying to save his daughter from vampires and gradually, subtly shifted to his surrogate daughter’s fight for her soul. It was, in short, a masterpiece of supernatural suspense.

Penny Dreadful: The Complete Series is in stores tomorrow.

Sir Malcolm Murray (Timothy Dalton, The Rocketeer, Doctor Who) became famous for his explorations of Africa, but all the fame and wealth in the world seemed unable to help him save his daughter, Mina, from a gruesome fate – though he was supported in his cause by his faithful servant Sembene (Danny Sapani, Misfits, The Bastard Executioner), a troubled American cowboy named Ethan Chandler (Josh Hartnett, Sin city, 30 Days of Night), an inventor obsessed with reanimating life, Dr. Victor Frankenstein (Harry Treadaway, City of Ember, The Lone Ranger), and the beautiful Vanessa Ives (Eva Green, Casino Royale, Camelot).

Though the first season seemed to be one in which a determined coterie of good guys fought a supernatural evil, as it progressed, it became apparent that it was as much about each of the main characters dealing with some kind of inner demon – in one case an inner demon that had a very physical incarnation.

The second season introduced an actual villain, in Evelyn Poole (Helen McCrory, Skyfall, Peaky Blinders)  – a character who had appeared once in season one but whose return showed her to be something much, much different.

Finally, season three focused completely on Vanessa Ives’ battle for her soul – with a sneaky clever reference back to Sir Malcolm’s struggles in season one – plus Evelyn Poole’s protégés.

In something of a rarity in television, all twenty-seven episodes of Penny Dreadful were written by series creator John Logan (Rango, Hugo, Skyfall) and, as a result, it feels like an exceptionally good twenty-seven hour movie, with a richness of character and situational development.

Logan plays with great (and less great) characters from literature – Dr. Frankenstein,  Frankenstein’s creature (Rory Kinnear, Five Days, Vexed) Dorian Gray (Reeve Carney, The Tempest), and Mina Harker (Olivia Llewellyn, The Lizzy Borden Chronicles) – in a setting (Victorian England) that makes for an interesting backdrop since virtually none of the characters is really a classic example of a Victorian.

More interesting than the fictional characters Logan has brought together are his original characters: Ethan is not quite your stereotypical cowboy – his inner demon’s physical manifestation is a new take on the classic werewolf films of the thirties; Vanessa Ives is a thoroughly modern woman, independent, indominatible and capable of taking things into her own hands when necessary; Sir Malcolm, outwardly very Victorian, is far more open-minded and openly as emotional as he is intelligent; Sembene is more than the typical manservant, he is also Sir Malcom’s closest friend

Add to the mix a Frankenstein’s Creature who is more closely aligned with the character in Mary Shelley’s novel – intelligent, sensitive and philosophical but possessed of an inner rage that is frightening when loosed; Lily (Billie Piper, Doctor Who, ShakespeaRe-Told), created to be the Creature’s bride but in reality a proto-feminist with a bit of a messiah complex, and a Dorian Gray for whom Victorian is so last Tuesday – he exists only to find and indulge in the new (boredom being the immortal’s greatest sin), and you have a collection characters quite unlike anything ever seen on television.

The show’s title comes from lurid serials that were published on a weekly basis in Victorian England. They were usually tales of dark deeds and valiant heroes set in a world where the supernatural was commonplace. Their sole reason for existence (besides making money – and they were lucrative) was to entertain.

Penny Dreadful is a tad bit more ambitious. It does everything a Victorian penny dreadful would do but adds layers of character development and exhibits purpose in the way it looks within each character for explorations of their best and worst aspects – and explores their relationships with each.

Physically, the series is glorious to look at – beautifully shot, with exquisite costuming and set design (for season one a theater set indistinguishable from a working set was created) – there has been nothing on television like it.

For the Penny Dreadful: The Complete Series set, the bonus features are exactly as they were on the original single season releases, which is unfortunate because they were, essentially, featurettes and text features that could be found online during the run of the series, which really only skim the surface of their subjects – and they grew fewer and fewer over the three seasons.