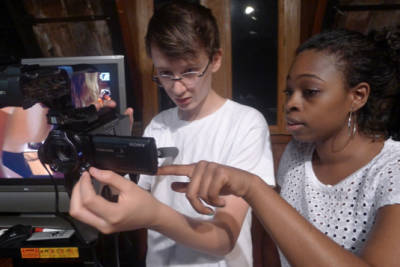 PBS has acquired a new documentary series from DCTV – Our Cameras, Our Stories: a six-week series of autobiographical short films by a group of talented high school filmmakers in the New York area. In all, twenty-one films by twenty-one youths – ranging from a girl who was homeless through three years of high school and a young man who last lost literally dozens of friends and relatives to gun violence, to a Bengali teen who struggles to balance being a typical American teen with his parents being devout Muslims.

Our Camera, Our Stories premieres on WNET 13 on Saturday, October 4th (1:30/12:30C). Check your local PBS schedule for times. For further details, follow the jump.

“Our Cameras, Our Stories” To Air Weekly On New York City WNET 13 And PBS Affiliates Across the Country

Check out The Wrap’s Coverage HERE

New York, NY (September 18, 2014) – Pioneering New York City media arts center Downtown Community Television Center (DCTV) continues to find exciting ways to use media to empower New Yorkers by premiering short autobiographical documentaries by a group of talented high school film makers. “Our Cameras, Our Stories” is a six-week series of short documentary films made by young New Yorkers about their lives, and the often heartbreaking challenges of living in a very hard, big apple of a city. All the teenagers all used the facilities of DCTV to make their films.

From teenage homelessness, to coping with a crippling illness, to the difficulty of living in two widely divergent cultures, to dealing with a parent’s devastating mental illness… these stories are personal and intimate, told in a way that only those who have lived them can tell. And they are only the beginning. There are millions of New Yorkers under the age of 21. Can you imagine their stories? You don’t have to, because you can watch them.

“The most important aspect of this program is that it’s 100% kid built,” said DCTV co-founder and Co-Executive Director Jon Alpert. “They shot the films, they edited the films and, of course, they lived their films.”

• 17-year-old Jasmine Barkley was homeless for three years during high school. In her film When Life Hands You Lemons and despite coming from a broken family and having many of the responsibilities of an adult, she finds the strength she needs to survive in her passion for filmmaking and playing basketball, and in writing letters to her incarcerated father.

• Ronald Merritt has lost 35 friends and relatives to gun violence at the tender age of 23. In My Camera’s My Gun Now, he breaks that cycle of violence.

• Mohammed Yakub is a Bengali American, struggling between the world of his devout Muslim parents and his life as a typical American teenager.

These are only a few of the personal, heartfelt, and universal stories being told in “Our Cameras, Our Stories.”

There is no minimum age requirement to become a filmmaker and putting cameras in the hands of young people can enlighten us to stories that adults are not telling…or cannot tell. “There is nothing on TV that I want to see,” says filmmaker Derek Horton a 17 year-old from East New York. “Nothing that represents my life, my world.”

“We did the filming. We did the editing,” says Barkley. “I was homeless for 3 years while I was in High School. No one can imagine what it was like. No one else can tell my story, adding, “I want people to know what many young New Yorkers go through. And I want to inspire those facing the same challenges.”

“Far too often in our society, the young people are ignored,” said Alpert. “Their voices are no less valid than those of the adults in our world. This program gives the youth of New York a voice and we see no reason why it can’t serve as a pilot program for young people all over the world.”

The series premieres on WNET 13 on October 4th at 1:30 pm followed by airdates all across the country.  A total of 21 films by 21 young New York City young filmmakers will be featured as part of the series.