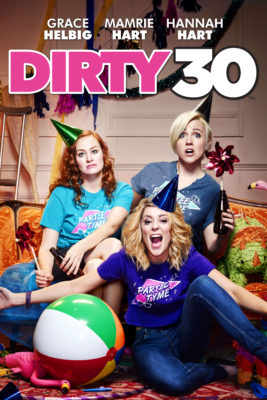 Three friends who are in a major rut decide to throw a party for one’s 30th birthday.

Normally, I wouldn’t think much of the possibilities, but Grace Helbig and Hannah Hart starred in (and co-produced) the subversive new take on Electra Woman and Dyna Girl – and with Mamrie Hart were of the much better than average Camp Takota.

So, check out the trailer after the break. Dirty 30 will be in select theaters and on Digital HD on Friday, September 23rd, with the DVD becoming available exclusively at Target on Tuesday, September 27th.

MOVIE TO BE RELEASED ON DVD EXCLUSIVELY AT TARGET SEPTEMBER 27, 2016

SANTA MONICA, CA (June 24, 2016) – Lionsgate, a premier next generation global content leader, announced today they will release the upcoming comedy DIRTY 30 digitally and in select theaters on September 23rd, 2016. It will also be available on DVD exclusively at Target September 27, 2016.

Lifelong friends Kate (Mamrie Hart), Evie (Grace Helbig) and Charlie (Hannah Hart) are in a rut. Kate spends her days at a middling job and her nights alone or on failed dates. Evie is married with the in-laws from hell, wandering from one charitable cause to the next. Charlie has the girl of her dreams but just can’t seem to pull her business (or her act) together. On the eve of Kate’s 30th birthday, she agrees to let Evie and Charlie throw her a party. But what’s supposed to be a simple celebration becomes a wild who’s who of past and present, and things quickly spiral out of control.

Mamrie Hart is an accomplished comedian, serving as a scribe of Dirty 30 in addition to her leading role as ‘Kate’. Other writing credits include the film Camp Takota, which out-performed Oscar®-nominated features on iTunes the week of the Academy Awards®. Hart’s debut book, “You Deserve a Drink,” landed the #5 spot on the New York Times Best Seller list. Recognized by both Buzzfeed and the Streamy Awards for her standout presence on YouTube, Hart continues to grow her career further into film and original series as both an actress and creator with recent work alongside The Jim Henson Company and New Form Digital. In addition to noteworthy Hollywood credits, Hart is the proud mom of her internet-famous, hairless dog, Beanz.

Grace Helbig has two books under her belt, Grace & Style and New York Times #1 Best Seller Grace’s Guide: The Art of Pretending to Be a Grown-Up. She has been listed as one of Time Magazine’s 30 Most Influential People On The Internet, Variety’s Top 10 Comics to Watch, Fast Company’s 100 Most Creative People in Business, Forbes’ 30 Under 30, Hollywood Reporter’s Silicon Beach Power 25, Time Magazine’s Best Twitter Feeds, and BuzzFeed’s 11 Awesome Up-And-Coming Funny Ladies You Should Know. Her podcast Not Too Deep is in the top 50 of all podcasts.

Hannah Hart is a comedian, actress, producer, and best-selling author, whose first book My Drunk Kitchen: A Guide to Eating, Drinking, and Going with Your Gut, spent six weeks on the New York Times Best Seller list. In 2014, The White House recognized Hart’s impact through her national initiative Have A Hart Day, and invited her to lead a discussion about millennial engagement with President Obama. The following year, Hart was named one of Forbes’ 30 Under 30. Hart’s highly anticipated sophomore book called Buffering: Unshared Tales Of A Life Fully Loaded, will be released in October 2016.

Rating: This film is not yet rated