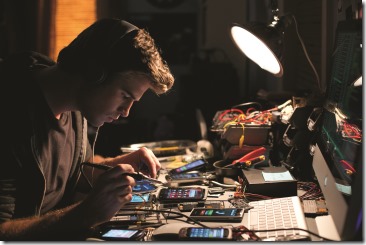 Paranoia is sleek, efficient and hollow. It follows an entry level worker at an IT company through a presentation that leads him and his team being fired and the transgression that forces him to spy on his boss’ rival and former mentor. Since his boss and the mentor are played by Gary Oldman and Harrison Ford, you’d think Paranoia would be a better movie than it is.

When Adam Cassiday (Liam Hemsworth) has his presentation for a new way to use cell phone technology to disengage from connections while giving the appearance of connecting gets shot down by Nicholas Wyatt (Oldman), he uses his team’s discretionary fund – to which he has somehow not been denied access – to fund a farewell party for his team. $16,000 worth. 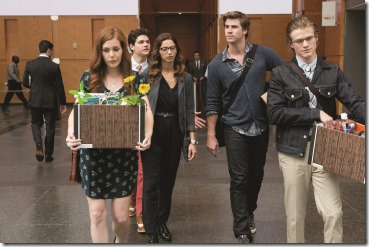 This not only gets him noticed by Wyatt, it gets him planted by Wyatt in his mentor, Jock Goddard’s (Ford) company. The plan is for him to gain access to a revolutionary advance and provide the details and prototype to Wyatt. He is prepped by Wyatt’s right-hand person, Judith Bolton (Embeth Davidtz) and aces a position at Goddard’s company based on the tech he had presented to Wyatt just before he got canned.

There are some peripherals to the plot – the woman with whom he’s had a recent one-night stand (Amber Heard) turns out to be a hotshot at Goddard’s company; Adam’s dad (Richard Dreyfuss) has emphysema and only Adam’s company benefits have kept them from going under financially; two members of Adam’s former team (Lucas Till, Angela Sarafyan) become a couple – that exist only to serve Adam’s new career in corporate espionage, or give us a reason to root for him.

Another character, FBI Agent Gamble (Josh Holloway), exists solely to provide Adam with a possible way to get himself out of a predicament that seems to grow worse with every passing second. Julian McMahon gets to play Wyatt’s attack dog/bodyguard – another one-note character who exists solely because the plot needs a physical nasty to offset Wyatt’s intellectual nasty. 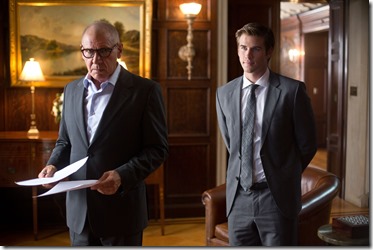 Pretty much every character is barely sketched in, so the movie only crackles when the big boys and girls – Ford, Oldman, Dreyfuss and Davidtz are onscreen in some combination. Hemsworth does what he can with what he’s got to work with, but he can’t quite hold his own with any of the veteran members of the cast. He doesn’t seem to have his brother, Chris’ ease in front of a camera, or his range.

Technically, the film looks great. The cinematography is sharp; the score is fine; the editing is terrific. Director Robert Luketic keeps moving along at a fair clip – almost as if he knows his script (by Jason Dean Hall and Barry Levy) is far too shy in the character development end. Where the script does show signs of potential is with the levels of double and triple-crossing (even then, the last act is predictable); where it fails is in giving us any real reason to care about any of the characters.

In the end Paranoia is sleek, efficient and soulless/hollow.