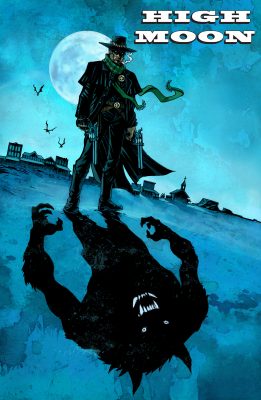 Papercutz’ Super Genius Imprint will be publishing the complete classic horror/western graphic novel series High Moon – re-releasing the two volumes of the Harvey Award-winner for Best Online Series – previously available from DC’s Zuda Comics imprint – plus a new third volume that will bring the series to a satisfying conclusion.

High Moon follows a former Pinkerton agent/current bounty-hunter with a dark secret who finds something unexpected when he investigates strange occurrences in the small Texas town of Blest.

Super Genius will release Vol. 1, Bullet Holes and Bite Marks, on October 17th, with Volume 2 following in May of 2018. Read on for further details.

PAPERCUTZ’ SUPER GENIUS IMPRINT TO PUBLISH HIGH MOON, THE ACCLAIMED HORROR/ WESTERN GRAPHIC NOVEL FROM THE CREATORS OF THE ONLY LIVING BOY

RELOADED, REMASTERED AND FEATURING AN ENTIRE VOLUME OF NEW MATERIAL

NEW YORK, NY (February 10, 2017): Timed to February’s full moon, Papercutz’s Super Genius imprint has announced that it will publish the definitive edition of HIGH MOON, the acclaimed graphic novel series by writer David Gallaher and artist Steve Ellis. Originally published by DC’s Zuda Comics imprint in 2007 and the Winner of the Harvey Award for Best Online Series, HIGH MOON is a unique western and horror genre mash-up about the investigations of a mysterious bounty hunter, one whose own dark secret emerges every full moon. Or, as Molly Crabapple said, “With werewolves, gunslingers, and the sumptuous artwork of Steve Ellis, HIGH MOON will change everything you thought you knew about the Old West.”

Super Genius will publish HIGH MOON: BULLET HOLES AND BITE MARKS this October, followed by volume 2 in May of 2018. For their release of HIGH MOON, Super Genius will remaster the existing art for Volumes One and Two, before concluding the story with all new material in Volume Three. All three graphic novels will feature new covers by artist and co-creator Steve Ellis, the storyboard artist and illustrator on AMC’s Breaking Bad (The Cost of Doing Business) and The Walking Dead (Dead Reckoning) games, and the co-creator of THE ONLY LIVING BOY graphic novel series, also written and co-created by Gallaher and published by Papercutz.

“Super Genius is committed to publishing unique, creative visions from the likes of Jessica Abel (TRISH TRASH) and Melissa Jane Osborne & Veronica Fish (THE WENDY PROJECT). David Gallaher and Steve Ellis are extremely gifted storytellers and their smart and relevant story is a natural fit for this imprint,” said Super Genius Editor-in-Chief Jim Salicrup. “I immediately gravitated to HIGH MOON’s classic themes of xenophobia and self-reliance which are as relevant today as they ever have been.”

In HIGH MOON, former Pinkerton agent and current bounty-hunter Matthew Macgregor investigates a series of strange happenings in a small Texas town. Drought has brought famine and hardship to Blest. The summer heat pushes the temperature to unbearable heights during the day. The nights are even worse– for the streets are haunted by strange, unnatural creatures. And even as Macgregor works to uncover the truth about the creatures, he struggles to keep his own supernatural nature a secret.

“A decade ago, we began designing these tough guy heroes, magnificent landscapes, and unearthly creatures,” said co-creator and artist Steve Ellis. “With Super Genius publishing HIGH MOON, we can create the full story, as we always envisioned.”

The Super Genius editions will be larger than the previous Zuda Comics print edition and will present the landscape formatted series in a removable slipcase that allows it to be racked vertically, maximizing its visibility for retailers and consumers. “Looking at Steve’s gorgeous artwork, we knew we didn’t want to alter the layouts of the original pages,” said Super Genius publisher Terry Nantier. “At the same time we wanted to amplify the exposure of the book in the market. We didn’t want any physical limitations to hold that back. With the slipcase, we have the added bonus of creating a really nice contemporary edition that will look great on bookshelves.”

All three volumes of HIGH MOON will be published in hardcover at $24.99 and simultaneously in paperback at $14.99. HIGH MOON: BULLET HOLES AND BITE MARKS  will be available in bookstores and comic book stores across the United States and Canada on October 17th, 2017.

“Between WESTWORLD, LOGAN, and RED DEAD REDEMPTION, the western is resonating in our culture in weird and unusual ways,” said co-creator and writer David Gallaher. “HIGH MOON recalls the best tropes of both the classic western adventure and werewolf mythology. I can’t wait for readers to discover our bloody tale of werewoles six shootboys, bullets and the supernatural.”

To find a comic shop near you go to http://www.comicshoplocator.com/ or dial 1-888-COMIC BOOK.

“An utterly engaging work that ripples with a great palette heavy on Western wood and leather tones.”—The Washington Post“Reads like a cross between a Sergio Leone western and a gore-laced monster movie…. Ellis’ gorgeous red-and-blue-hued panels are a delight to behold.”—Booklist

Author David Gallaher has received multiple Harvey Award nominations and won The Best Online Comic Award for his work on High Moon for DC Comics. David was an early pioneer of digital comics developing projects for Marvel as well as Box 13 – the first comic designed specifically for the iPhone – for comiXology. He has served as an editor for Attack on Titan, Sailor Moon, has also written for Green Lantern and the Incredible Hulk. David is also the author behind the critically-acclaimed web comic series — The Only Living Boy — currently in print from Papercutz.

Steve Ellis has worn many hats as illustrator, author, art director and concept designer. Over his varied career he has created artwork and conceived projects for companies such as Wizards of the Coast, Random House, Impact books, Marvel Comics, DC Comics, AMC, Scholastic Books, Impact books, Rogue Entertainment, Blizzard Entertainment and many others. Recently he has developed the award winning comic series High Moon for DC Comics as well as acted as the lead designer, storyboard artist and illustrator on AMC’s Breaking Bad (The Cost of Doing Business) and The Walking Dead (Dead Reckoning) games.

Bottled Lightning has pioneered the landscape of modern comics. From their award-winning to work on High Moon to the ground-breaking work on Box 13, the studio has sparked new life and new excitement into a broad range of projects for The Walking Dead, Green Lantern, Dungeons & Dragons, MTV, and the New York City Police Department. Their featured projects include HIGH MOON, THE ONLY LIVING BOY, BOX 13, and BOX 13: THE PANDORA PROCESS. Bottled Lightning is represented by Dara Hyde at the Hill Nadell agency. For more information, please visit: http://bottled-lightning.com/

ABOUT PAPERCUTZ: At Papercutz, we’re all about publishing great graphic novels for all ages. Papercutz graphic novels for kids, tweens, and teens include a wide range of genres, including humor, action adventure, mystery, horror, and favorite characters. Papercutz is proud to be the only publisher exclusively dedicated to children’s graphic novels. We work every day to introduce young readers to the imaginative wonders waiting to be discovered in comics.

To find out more visit http://www.papercutz.com.