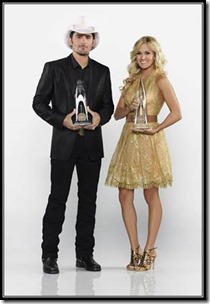 Some people understand the concept of ‘If it ain’t broke, don’t fix it.’ Like the producers of the annual CMA Awards, who have announced that Brad Paisley and Carrie Underwood will host the Awards for the sixth straight year on ABC Wednesday, November 6, 2013 at 8/7C.

Country superstars Brad Paisley and Carrie Underwood will be returning to host “Country Music’s Biggest Night™” for the sixth consecutive time in 2013. “The 47th Annual CMA Awards” airs live from the Bridgestone Arena in Nashville on WEDNESDAY, NOVEMBER 6 (8:00-11:00 p.m., ET) on the ABC Television Network. The popular hosts used “CMA Music Festival: Country’s Night to Rock” to make the announcement when the concert special aired earlier this evening on ABC.

“Carrie and Brad are the consummate hosts,” said Ed Hardy, President of the CMA Board of Directors. “They have the respect of our industry, artistic credibility, critical acclaim and a quick-witted, genuine rapport that makes them popular with our audience and the viewers at home. We are delighted to have them back as hosts for the sixth year.”

Paisley is a critically acclaimed singer, songwriter, guitarist and entertainer who has earned numerous awards and accolades, as well as being a proud member of the Grand Ole Opry. Since his first No. 1 single in 1999, he has placed 22 singles at the top of the charts, his most recent from his acclaimed new album, Wheelhouse, which features his new single, “I Can’t Change the World,” as well as the back-to-back No. 1 hits “Southern Comfort Zone” and “Beat This Summer.” This is Paisley’s first self-produced project, and he wrote or co-wrote all tracks on the album. Paisley’s 2012 “Virtual Reality World Tour” played to more than one million fans in the U.S. and Europe. His 2013 tour, “Beat This Summer Tour presented by Cracker Barrel Old Country Store®,” has played to more than 423,000 fans to date.

Underwood has received five CMA Awards in her career – only six other female solo artists have received more, including Dolly Parton (nine), Loretta Lynn (eight) and Allison Krauss (eight). Like Tammy Wynette (1968-1970), Underwood has won three consecutive Female Vocalist of the Year trophies (2006-2008), as well as Single of the Year (2007 for “Before He Cheats”) and the Horizon Award (2006). Her 15 career CMA Award nominations include two for Album of the Year for Carnival Ride (2008) and Play On (2010); two nominations for Music Video of the Year for “Jesus Take the Wheel” (2006) and “Before He Cheats” (2007); and Musical Event of the Year for “I Told You So” featuring Randy Travis (2009). She has been nominated for Female Vocalist of the Year every year since winning in 2006 (2006-2012).

Since releasing her debut album in 2005, Underwood has sold more than 15 million albums and placed 17 No. 1 singles on the charts, eight of which she co-wrote. Her current album, Blown Away, made history by debuting at No. 1 on Billboard’s Top Country Albums chart, making Underwood only the second Country artist in the 47-year history of the chart to have each of their first four albums debut at No. 1. The Platinum-selling Blown Away also debuted at No. 1 on the all-genre Billboard 200 chart, making her only the second Country artist in history to have three consecutive albums debut at No. 1. Underwood’s recently wrapped “Blown Away Tour” launched in the spring of 2012 and continued through May 2013, for a total of 112 dates in 110 cities, 6 countries, and 3 continents, playing for more than 1 million fans and selling out every concert this year.

The CMA Awards nominees and winners are determined by more than 7,000 industry professional members of CMA, which was the first trade organization formed to promote an individual genre of music in 1958.

Winners of “The 47th Annual CMA Awards” will be determined in a final round of voting by eligible voting members of CMA. CMA Awards balloting is officiated by the international accounting firm of Deloitte & Touche LLP. The eligibility period for the 2013 CMA Awards is July 1, 2012 to June 30, 2013.

Ticket information for the CMA Awards will be announced later this summer with information available at CMAawards.com. Or follow the conversation on Twitter at #CMAawards.

“The 47th Annual CMA Awards” is a production of the Country Music Association. Robert Deaton is the Executive Producer and Paul Miller is the Director. The CMA Awards will be shot in high definition and broadcast in 720 Progressive (720P), ABC’s selected HDTV format, with 5.1 channel surround sound.

The first “CMA Awards Banquet and Show” was held in 1967. The following year, the CMA Awards was broadcast for the first time – making it the longest running, annual music awards program on network television. The Awards have aired on ABC since 2006. ABC will be the network home of the CMA Awards and CMA’s other two television properties, “CMA Music Festival: Country’s Night to Rock” and “CMA Country Christmas,” through 2021.