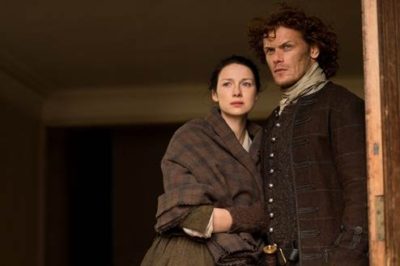 The second season finale of Starz’s hit series Outlander takes the name of Diana Gabaldon’s second novel in the series for its title – and Dragonfly in Amber will be a ninety-minute episode that introduces two new, much anticipated characters to the saga of the time traveling Claire Randall Fraser: Brianna (Sophie Skelton) and Roger Wakefield (Richard Rankin).

Starz Will Be Re-Airing the First 12 Episodes of Book Two in a Marathon Beginning Saturday, July 2nd at 12PM ET/PT

Beverly Hills, Calif. – June 6, 2016 – Starz, in association with Sony Pictures Television, has announced today that the “Outlander” Book Two finale will air on Saturday, July 9th at 9pm ET/PT as an epic 90-minute episode. Fans will be treated to an extra 30 minutes in the finale episode titled “Dragonfly in Amber,” namesake to the second of eight books in Diana Gabaldon’s international bestselling Outlander book series on which this season is based.

Highly-anticipated characters, “Brianna” and “Roger Wakefield,” previously announced to be played by Sophie Skelton (“Foyle’s War”) and Richard Rankin (Burnt), respectively, will be introduced in the finale episode.

Ahead of the Book Two finale, Starz will be showing a marathon of the first twelve episodes of Book Two beginning Saturday, July 2nd at 12pm ET/PT giving viewers the chance to relive the season thus far and get ready for the mega-finale the following week on Saturday, July 9th.

Flashing forward to 1968, Claire travels to Scotland with her twenty-year-old daughter, Brianna, and meets Roger Wakefield. Claire visits Lallybroch and Culloden Moor to make peace with the past, while Brianna and Roger bond over researching Randall family history. Claire finally reveals the truth to Brianna about her time travel through the stones, her life in 1700’s Scotland, and Brianna’s true parentage. The story is intercut with another one back in the 18th century, which happens on the day of the Battle of Culloden. When Jamie’s last ditch attempts to deter The Prince fail, he and Claire come up with a dangerous plan – which Dougal overhears, inciting him to a murderous rage. Jamie must do everything he can to save the ones he loves, even if it means saying goodbye to some – or all –of them.