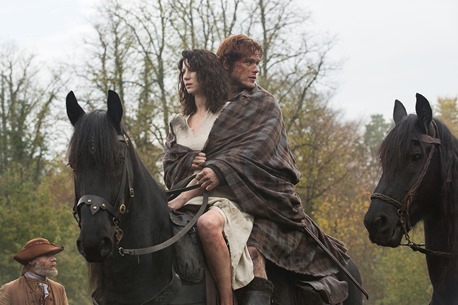 After the series premiere of Outlander garnered more viewers than any original series on Starz, it was a no-brainer that the show would get a second season. Today, Starz CEO Chris Albrecht announced that this is the case.

Season Two of Outlander will adapt the second book in the series, Dragonfly in Amber. The order was for ‘at least 13 episodes.’ For more, follow the jump.

Second Season to be at least 13-Episode Run, Based Upon Dragonfly in Amber, Book Two of Diana Gabaldon’s International Bestselling Novels

Beverly Hills, Calif., August 15, 2014 – Starz Chief Executive Officer, Chris Albrecht, announced today that Starz has once again partnered with Sony Pictures Television to greenlight a second season of “Outlander,” the critically-acclaimed original series adapted from Diana Gabaldon’s international bestselling books. Season two will be at least 13-episodes and based upon the second of eight books in the Outlander series, entitled Dragonfly in Amber.

The first 16-episode season of “Outlander,” filmed on location in Scotland, debuted on August 9th, 2014 at 9pm PT/ET, with the first episode setting multiplatform viewing records, surpassing 5 million views in the first week alone, drawing equal male and female viewership (**SOURCE: Starz internal data and Nielsen audience figures as of 8/14/14). Additionally, the series premiere marked a notable media and social media success for the network, with fans hosting viewing parties around the country. It was No. 1 in Nielsen Ratings for Twitter conversation volume among all television series on premiere day, trended twice at No. 2 in U.S. Twitter Trends (**SOURCE: Sysomos).

“The overwhelming support ‘Outlander’ has received from the fans, viewers and critics made the decision for us to go ahead with the second book a very easy one. Diana Gabaldon has given us years of great drama.  With an incredible artist such as Ronald D. Moore at the helm and a cast as spectacular as this, we look forward to continue this spell-binding journey with Claire, Jamie, Frank, Brianna, Roger and everybody over the centuries,” said Albrecht.

Creator Ronald D. Moore said “I’m thrilled at the prospect of doing another season of this show for STARZ. This project has been a labor of love from the very beginning and it’s incredibly gratifying to see it succeed with viewers and critics alike.”

“Fans of the Outlander books have waited a long time to see this incredible story brought to life on screen, and Ron and his team have delivered a show that exceeds expectations,” said Zack Van Amburg, President of  Programming for Sony Pictures Television.  “We look forward to our continued partnership with Starz to present the next chapter of this epic tale to longtime fans and viewers who are just discovering the series.”

The series adaptation for “Outlander” was developed by Ronald D. Moore (“Star Trek: Deep Space Nine,” “Star Trek: The Next Generation”). Moore is best known for his work on “Battlestar Galactica,” which won him a Peabody Award in 2006. Ronald D. Moore and Jim Kohlberg are executive producers of “Outlander,” which is produced by Tall Ship Productions, Story Mining and Supply Company and Left Bank Productions in association with Sony Pictures Television.

Diana Gabaldon’s eight-book series has sold more than 20 million copies and has graced the New York Times Best Sellers list six times. The “Outlander” series spans the genres of romance, science fiction, history, and adventure in one grandiose tale. It follows the story of Claire Randall, a married combat nurse from 1945 who is mysteriously swept back in time to 1743, where she is immediately thrown into an unknown world where her life is threatened. When she is forced to marry Jamie Fraser, a chivalrous and romantic young Scottish warrior, a passionate affair is ignited that tears Claire’s heart between two vastly different men in two irreconcilable lives.

Starz will retain all domestic multiplatform pay TV rights to the original series.