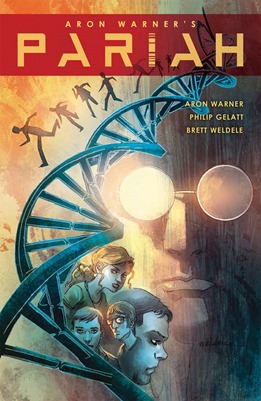 Aron Warner won an Academy Award® as producer of Shrek. Today, Dark Horse has released a collection of his webcomic – co-written with Philip Gelatt and drawn by Brett Weldele – Pariah: Volume 1. It’s the story of a group of genetically engineered supergenius teens – called vitrios; and their exile to a decrepit satellite orbiting Earth, and their banding together to use their abilities to get home.

Following the web-to-print release of Pariah: Volume 1, an eight-issue miniseries will be released beginning next month. For more, check out the press release following the jump.

Pariah is cowritten by Aron Warner and Philip Gelatt (Petrograd), with artwork by Eisner-nominated painter Brett Weldele (The Surrogates). Volume 1, which collects the webcomic, is available in bookstores everywhere today.

In Pariah, genetically engineered geniuses known as vitros are labeled a terrorist cell after an explosion at a military weapons lab. The vitros are rounded up and left on a decrepit satellite orbiting Earth. Now they must band together and use their supergenius abilities to get back to Earth safely.

“A group of hyper-intelligent teenagers called vitros suddenly find themselves hunted by a society that has marginalized them . . . I was hooked by the fifth page.”—Fanboy Comics

“It does have a lot of potential and ironically enough much of the story is about untapped potential of highly intelligent teens being ostracized for, well, being smarties.”—Comic Bastards

“A good read. The art is great, plain and simple.”—Eat Geek Play

Founded in 1986 by Mike Richardson, Dark Horse Comics has proven to be a solid example of how integrity and innovation can help broaden a unique storytelling medium and establish a small, homegrown company as an industry giant. The company is known for the progressive and creator-friendly atmosphere it provides for writers and artists. In addition to publishing comics from top talent such as Frank Miller, Mike Mignola, Neil Gaiman, Brian Wood, Gerard Way, Felicia Day, and Guillermo del Toro, and comics legends such as Will Eisner, Neal Adams, and Jim Steranko, Dark Horse has developed its own successful properties, including The Mask, Ghost, Timecop, and SpyBoy. Its successful line of comics and products based on popular properties includes Star Wars, Mass Effect, Buffy the Vampire Slayer, Aliens, Conan, Emily the Strange, Tim Burton’s Tragic Toys for Girls and Boys, Serenity, and Domo. Today Dark Horse Comics is the largest independent comic book publisher in the US and is recognized as one of the world’s leading publishers of both creator-owned content and licensed comics material.