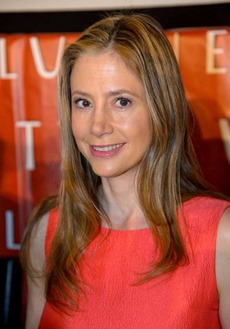 Oscar® and Golden Globe® winner Mira Sorvino will play Sara, a former graphic artist who has never felt more alive since the alien invasion, in the fourth season of TNT’s Fallen Skies. Sara’s multi-episode arc begins with a chance encounter with Colin Cunningham’s John Pope that leads her to the resistance.

Oscar® and Golden Globe® winner Mira Sorvino (Mighty Aphrodite) is set for a multiple-episode guest-starring arc in the fourth season of TNT‘s epic drama Falling Skies. Sorvino, whose credits include the hit comedy Romy and Michele’s High School Reunion and Guillermo del Toro’s sci-fi thriller Mimic, will play Sara, a woman far removed from her former life as a graphic designer. She is now dogged by death at every turn, yet she has never felt more alive, free or fearless. A chance encounter with guerrilla fighter John Pope (Colin Cunningham) leads her to join the resistance and develop a strong personal bond with the outlaw-turned-warrior.

Falling Skies is currently in production on its fourth season, which is slated to launch on TNT in summer 2014. Produced for TNT by DreamWorks Television and executive producer Steven Spielberg, the series tells the extraordinary story about life and survival in the wake of a catastrophic alien invasion. Falling Skies stars Noah Wyle as a college history professor who has become an unlikely resistance leader. The series also stars Moon Bloodgood, Will Patton, Drew Roy, Connor Jessup, Maxim Knight, Seychelle Gabriel, Mpho Koaho, Colin Cunningham and Sarah Carter. Falling Skies premiered in summer 2011 and ranked as basic cable’s #1 new series of the year. In its second and third seasons, it ranked as one of basic cable’s Top 5 summer dra mas with adults 18-49 and adults 25-54. In addition to Spielberg, Falling Skies is executive-produced by DreamWorks Television heads Justin Falvey and Darryl Frank, along with David Eick and Greg Beeman.

TNT is television’s destination for drama. Seen in 99 million households and ranking among cable’s top networks, TNT is home to such original drama series as Rizzoli & Isles, Major Crimes, Falling Skies, Perception, Dallas and Franklin & Bash, as well as the upcoming Mob City, Legends, The Last Ship and Murder in the First. The network also features dramatic unscripted originals like Cold Justice, Boston’s Finest, The Hero, 72 Hours and the upcoming Marshal Law: Texas, Save Our Business, Inside Job, Private Lives of Nashville Wives, Life Flight, On the Menu (working title). In addition, TNT is the cable home to popular dramas like Hawaii Five-0, Castle, The Mentalist, Bones and Supernatural; primetime specials, such as the Screen Actors Guild Awards®; blockbuster movies; and championship sports coverage, including NASCAR, the NBA and the NCAA Division I Men’s Basketball Championship.