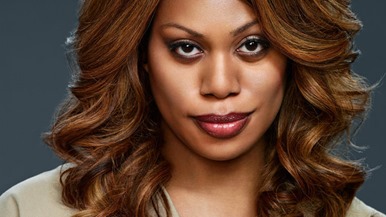 Orange is the New Black’s Laverne Cox has been chosen to guest star in Bravo’s first original scripted series, Girlfriends’ Guide to Divorce. She will play Adele Northrup, ‘a Pulitzer-Prize winning war journalist and LGBT activist who presents an award at a marriage equality gala.’

Girlfriends’ Guide to Divorce stars Lisa Edelstein as Abby McCarthy, ‘a self-help book author who hides the fact that she’s separated from her husband as she starts to navigate her life as a single woman in her early 40s.’ For more details, check out the press release following the jump.

A critically acclaimed actress, producer, speaker and advocate, Cox can currently be seen in “Orange is The New Black” in the ground breaking role of Sophia Burset, an incarcerated African American, transgender woman.  Cox has accomplished many firsts as a trans woman of color, from playing a leading role on a mainstream scripted television show, to producing and starring in her own television show to appearing on an American reality show. Her work as an actress and advocate landed her many accolades including the cover of TIME Magazine, multiple GLAAD Awards, the Dorian Rising Star Award, among others.  This fall Laverne will executive produce and host “Trans Teen: The Documentary” and is also working on a documentary titled "Free CeCe."  She is a renowned speaker and has taken her empowering message of moving beyond gender expectations to live more authentically all over the country.  Her powerful voice and moving story landed her a book deal with Harlequin.  In 2013, she won Best Supporting Actress at the Massachusetts Independent Film Festival for her work in the critically acclaimed film “Musical Chairs.”  Cox’s other television credits include “TRANSForm Me,” “Law and Order,”  “Law and Order: SVU,” “Bored to Death,” “I Wanna Work for Diddy” and the independent films “Carla” and “The Exhibitionists.”

“Girlfriends’ Guide to Divorce,” inspired by the “Girlfriends’ Guide” book series by Vicki Iovine, follows Abby who shocks the world when she reveals that her seemingly perfect life has all been a lie.  After publicly admitting that she has separated from her husband, Jake (Paul Adelstein, “Private Practice”), America’s once-favorite girlfriend finds her career and marriage in a free fall. As she starts to navigate life as a single woman in her 40s, Abby turns to her new divorced friends, rather than her married ones, for advice. Her friend Lyla (Janeane Garofalo, “Reality Bites”) is a legendary no-nonsense entertainment lawyer who is in a constant ‘War of the Roses’ battle with her ex-husband, and Phoebe (Beau Garrett, “Criminal Minds: Suspect Behavior”) is a former model and budding entrepreneur who has a very unique relationship with her ex.  Meanwhile, a rival attorney at Lyla’s firm, Delia (Necar Zadegan, “Emily Owens, MD”), is hired as Abby’s divorce attorney, and begins to cause a rift between the girlfriends.  Marti Noxon (“Buffy the Vampire Slayer”), Vicki Iovine, Meryl Poster, Liz Kruger, Robbie Duncan McNeil and Craig Shapiro serve as executive producers.

Bravo is a program service of NBCUniversal Cable Entertainment, a division of NBCUniversal, one of the world’s leading media and entertainment companies in the development, production, and marketing of entertainment, news, and information to a global audience. Bravo has been an NBCUniversal cable network since December 2002 and was the first television service dedicated to film and the performing arts when it launched in December 1980. Bravo Media is a part of NBCUniversal Entertainment & Digital Networks and Integrated Media group. For more information, visit www.BravoTV.com. Follow us on Twitter at https://twitter.com/BravoPR.