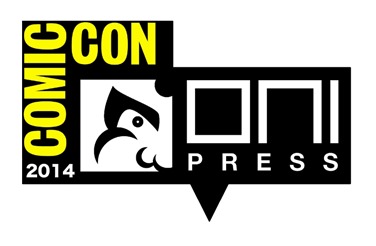 Portland, OR (July 11, 2014) – Another San Diego Comic-Con is upon us and as such, so is another avalanche of awesome Oni Press wares!  We’re proud to present a list of the exclusive and debut books and merchandise as well as a packed signing and event schedule!

As always, it’s a party and everybody’s invited to the Oni Press booth, #1833!

EVIL EDITION: $40 – The penultimate Scott Pilgrim full color hardcover edition is here! There are many questions in Scott Pilgrim’s terrible little life. First of all, why did he have to turn twenty-four? Secondly, why do robots keep trying to kill him? And why is Sex Bob-omb falling apart? Why is Ramona acting so weird? And finally, why won’t these brilliant and deadly Japanese twins leave him alone? Scott Pilgrim will find the answers to these questions… or die trying! Featuring exclusive bonus content and previously unpublished extras you won’t find anywhere else in the Universe!
COLLECTOR’S EDITION: $100 – The Collector’s Edition includes a SCOTT PILGRIM VOLUME 5 EVIL EDITION PLUS:
-5 prints
-10 vinyl stickers
-1 code for a digital copy of the book via ComiXology
-1 signed card
-2 scout-style patches
–A PAIR OF KIM PINE DRUMSTICKS!

$60 – Become a stylish subspace courier with the very first ever OFFICIAL Ramona Flowers bag!  It’s got a number of pockets, an epic inner lining of Scott Pilgrim art, and a heavy metal pull of Ramona’s hammer!
See below for a very special Preview Night promotion!

$24.99 – Allison Breaking is a talented journalist with her own blog and a lot of bills to pay, so when she receives an offer from a mysterious stranger named Burma to write his memoirs, it’s an offer she can’t refuse, not even with all the red flags popping up. But Burma is quite literally unlike any man Allison’s ever known – because he’s a cat. And this cat has stories to tell about how he (over the course of a few lifetimes) has shaped the world – and another, darker story that Allison must risk all to uncover… a story of what this particular cat has been doing with the LAST of his nine lives.
Paul Tobin and Benjamin Dewey will be signing! See schedule below for details.

I WAS THE CAT:
THE TREATS!

Attendees that purchase I WAS THE CAT during SDCC will receive a free 11 x 17″ copy of Benjamin Dewey’s incredible “I WAS WHAT KIND OF CAT?” infographic flowchart!
We’ll also be giving away masks of Burma, I WAS THE CAT’s shadowy feline co-lead all weekend long!

$19.99 – On Inauguration Day, newly elected President Stephen Blades hoped to tackle the most critical issues facing the nation: war, the economy, and a failing health care system. But in a letter penned by the outgoing President, Blades learns the truth that redefines “critical”: seven years ago, NASA discovered alien presence in the asteroid belt, and kept it a secret from the world. A stealth mission crewed by nine astronauts was sent to make contact, and they’re getting close–assuming they survive the long journey to reach their destination.

Today, President-elect Blades has become the most powerful man on the planet. This planet.
Issues #1-6 of the acclaimed creator-owned sci-fi series are collected in this trade paperback with a futuristic holofoil cover!

Charles Soule will be signing!  See schedule below for details.

Six months into the presidency, President Blades has deployed sci-fi superweapons to end wars in the Middle East, opening him to attacks from all sides, including a Congressman once romantically linked with the First Lady. Meanwhile, in space, as construction on the alien Chandelier is finally completed, the crew of the Clarke will truly understand what they’re facing.

Charles Soule and Gabo will be Signing!  See schedule below for details.
Proceeds from the sales of this issue are being donated to NASA!

$5 – Become a crew member of the USS Clarke with this high-quality, spaceworthy mission patch!  Iron it on wherever you like, but pro tip: it looks great on a spacesuit.
Patches will be FREE while supplies last to fans who purchase LETTER 44 VOLUME ONE during Charles Soule’s signings!  See below for details.

$19.99 – On their way to bury a time capsule, five friends – Grady, Heidi, Natasha, Daniel, and Billy – uncover a metal bunker buried deep in the woods. Inside, they find letters addressed to each of them… from their future selves. Told they will destroy the world in the very near future, the friends find, over the next few days, growing further and further apart. Though they’ve been warned against making the wrong choices, how do they know what the right ones are? Can the future really be changed, or will an even darker fate engulf the world? Collects the first four issues of the ongoing series.
Joshua Hale Fialkov will be signing!  See schedule below for details.

$10 – CONVENTION EXCLUSIVE VARIANT BY LETTER 44’s ALBERTO JIMÉNEZ ALBURQUERQUE!
Battle lines are being drawn, as Grady begins his ascent, and truth of his actions hits the other friends. But, can they confront him and change his path?
Joshua Hale Fialkov will be signing!  See schedule below for details.

$2 – Represent your side of the post-apocalypse and your love of Fialkov and Infurnari’s THE BUNKER with these ominous 1 1/4″ buttons!
Button sets will be FREE while supplies last to fans who purchase THE BUNKER VOLUME 1 during Joshua Hale Fialkov’s signings!  See below for details.

THE PEOPLE INSIDE
By Ray Fawkes

$24.99 – A new original graphic novel from the Eisner-nominated cartoonist of ONE SOUL! This ground-breaking new book looks at the lives and relationships of 24 individuals in a way only the medium of sequential art could. Relationships change, grow, and end but the one thing that always remains is the people inside who define both ourselves and our liaisons.
This edition of THE PEOPLE INSIDE will include a special, convention-only bookplate fans can get signed by the creator!
Ray Fawkes will be signing!  See schedule below for details.

$10 – CONVENTION EXCLUSIVE VARIANT by Mike Norton featuring BATTLEPUG!
A new series from Courtney Crumrin’s Ted Naifeh! Within the fairy-tale kingdom of Atraesca lies the prestigious Princess Academy, where young royals from all the five kingdoms come to get their education. But they’ve never before seen the like of Princess Ülga of Grimmeria. Armed with axe and sword, riding her war mammoth through the city gates, Ülga has come in search of schooling. But this barbarian princess might just end up schooling the people of Atraesca before that happens!
Ted Naifeh will be signing!  See schedule below for details.

THE LIFE AFTER #1 VARIANT

In an infinite city built on infinite sadness, there is one man capable of breaking free.  He will go through Heaven and Hell to save us all. Literally. A fantastical coming of age journey through the afterlife and beyond from Joshua Hale Fialkov (THE BUNKER, THE ULTIMATES) and breakout artist Gabo!

Joshua Hale Fialkov and Gabo will be signing!  See schedule below for details.

We wanna color you up!  You’ll never look at color comics the same way again! Join Oni Press editor in chief James Lucas Jones and rockstar colorists Lee Loughridge, Ryan Hill, along with more special guests, for a discussion on the role of colorists in storytelling and the processes behind their particular brands of eye-melting magic.

Join I WAS THE CAT creators Paul Tobin and Benjamin Dewey for a hilarious presentation about their new graphic novel and the finer points of feline world domination. After that, it’s Hemingway or the Highway when Joshua Hale Fialkov and Gabo as present a LIVE table read of THE LIFE AFTER #1! Come for the freebies, stay for the detailed descriptions of a future cat war, adventures in purgatory, and news and announcements about future Oni Press comics!

Three artists go head-to-head in a timed drawing competition! Join Oni Press’s Associate Editor Robin Herrera and Zander Cannon (Heck, Double Barrel) along with two other artists as they take YOUR suggestions and turn them into terrifying–or sometimes, adorable–monsters! Kids of all ages are welcome, with free comics available to attendees!

Ramona Flowers Preview Night Extravaganza!
Attendees that purchase the Ramona Flowers Bag on Preview Night, Wednesday, July 23rd, will receive TWO FREE enameled metal charms; one of Scott, and one of Ramona!*
Princess Ugg Barbarian Makeover
During Ted Naifeh’s signings, bring the kids by for a free, fearsome warrior makeover that will fill any child with the barbarian spirit!*
Kids’ Coloring Contest!
We’ll be giving away free comics throughout the convention to kids who color in any of our Mermin, Bad Machinery, Crogan’s, and/or Courtney Crumrin coloring pages in our Kids’ section, and every entry will go up on the “Fridge” for everyone to see!
Letter 44 / Penny4NASA
We’ll be donating proceeds from every copy of the Letter 44 #8 Convention Variant sold to Penny4NASA.  In the words of series creator Charles Soule, “Go Space!”
The Bunker Time Capsule
Throughout the entire convention, bring by an item to put into our Bunker time capsule and receive a special item from the Oni Press Time Capsule like t-shirts, stickers, comics, books, posters, and more!
*While Supplies Last

We can’t wait to see everyone in San Diego!