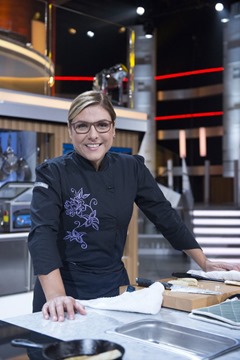 So here’s a fresh twist on cooking shows – maybe even one that might actually be fun to watch: Food Fighters! The concept is simple enough – amateur cooks face-off against famous chefs. Amateurs dish up their best dishes against world class chefs and then objective judges select the winner. You’d think it might be a bit of a slaughter, right?

Apparently not. Each Food Fight will have the amateur cook and the professional chef producing the amateur cook’s best/signature dish. Then comes the blind sample taste test. That ought to even the scales a bit. And that’s not even the end of it!

Contestants, Including a Homemaker, Teacher, IT Manager and US Army Sergeant, Put Their Treasured Family Recipes to the Ultimate Test

In a series of compelling, tension-filled showdowns, a top-notch amateur home cook will face off one by one against five professional chefs from every corner of the world.  Armed only with recipes for their best signature dishes, they’ll square off against an expert chef who will have to cook the same dish.  The completed dishes will then be sampled in a blind taste test by culinary judges known as “The Dinner Party.” After the two competing dishes are tested, the verdict determining the winner is given to the host.

If the home cook wins, they earn a cash prize.  Even if they don’t win, they still get to face off again against another culinary expert, climbing a money ladder with increasing cash prizes for every professional chef they knock out.  It’s the ultimate food fight, pitting amateur cooks against the most formidable culinary pros in America to see if they have what it takes to beat the very best.

Ben Silverman, Chris Grant, Jimmy Fox and Tim Puntillo are the executive producers of the series from Electus and Universal Television.

Photo by Eddie Chen/Courtesy of NBC