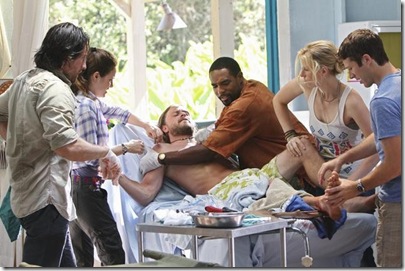 Off the Map [ABC, Wednesdays, 10/9C] is the new series from Shonda [Grey’s Anatomy] Rhimes’ production company, but outside of the series being about doctors, it is nothing like Grey’s Anatomy – in fact, if it resembles any other medical series at all, it’s M*A*S*H, only without the war.

Drs. Lily Brenner [Caroline Dhavernas, wonderfalls], Mina Minard [Mamie Gummer] and Tommy Fuller [Zach Gilford] arrive at a tiny clinic in ‘la ciudad de las estrellas’ [The City of Stars] and find themselves immediately thrown in their work. The clinic is run by Dr. Ben Keeton [Martin Henderson], who walked away from a position as the young Chief of Surgery at UCLA to found it. He runs the clinic with Dr. Otis Cole [Jason George], local doctor, Zitajalehrena Alvarez, or Zee [Valerie Cruz] and the mysterious Dr. Ryan Clark [Rachelle LeFevre].

Cole seems to be the stern one, while Zee is both passionate and fearsome. Keeton seems less like the legendary figure he’s supposed to be, and more like someone who has successfully sought refuge from his personal demons – most of the time. The three new doctors are each running away from something, too – great personal loss; family disapproval, etc. – but come to realize that they have run to something, as well. Then, there’s Charlie [Jonathan Castellanos], a local boy who helps out – running errands, translating and taking the wind out of arrogant newbies’ sails.

The series premiere, Saved By The Great White Hope, introduces the cast and sets up some intriguing potential personal interactions while hitting the new guys square in the face with the fact that they’re not in some cushy hospital – they’re in a place where a patio serves as an OR and there’s always something going on that requires their attention.

In terms of pacing and the sheer quantity of meatball surgery [for that’s what it amounts to], Off the Map is much closer to M*A*S*H than Grey’s Anatomy or, in fact, any medical series – comedy or drama – since M*A*S*H. A perfect example is Keeton and Brenner’s first case together – a retired guy named Ed [Michael McKean], who came to South America as part of a promise to his wife and wound up with one arm stuck on a zip line, dangling over a deep valley.

The one thing about Off the Map that echoes Grey’s is that the show is about the characters, first and foremost. The medical issues – like mistaking one disease for another, or having to cut Ed out of that zip line – are secondary, however much time an episode spends on them. In every case, we learn more about the characters and if, say, a coconut transfusion saves someone’s life, well that’s cool, too.

There’s a lot to like about Off the Map – and little to dislike. The cast is amazing – it’s great to see Dhavernas back on network TV and if the show is a hit, Rachelle Lefevre may actually be grateful she lost that role in that vapid vampire movie franchise. Cruz and Jason have a combustible chemistry and both Gilford and Henderson can be charming and likable. Gummer is also very good and, though she does occasionally remind of her more famous mother, has a presence that seems to be hers alone.

The premiere is very well written and directed – though I wish ABC had listed their credits on the screeners because I’d like to know who to thank for not being susceptible to many of the expected clichés [there are some – it is a medical show, after all]. The series was created by Jenna Bans [Grey’s Anatomy], but the premiere is the second ep filmed, so I can’t say for sure that she wrote it.

Off the Map feels fresh and invigorating. I haven’t had that reaction to a medical series since Grey’s Anatomy premiered almost seven years ago.

Photo by Mario Perez/Courtesy of ABC