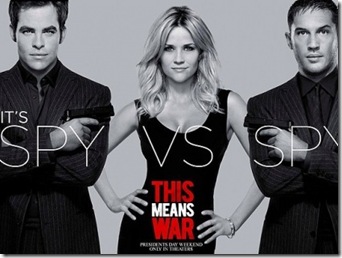 This Means War is a truly bizarre mash-up of bromance, romantic comedy, spy flick and Bugs Bunny. Tonally, it’s all over the place and, frankly, it makes sense only infrequently. Prior to its release, I could say with confidence that I had never actually felt guilty about liking a movie. Now, I’m flummoxed.

FDR [Chris Pine] and Tuck [Tom Hardy] are best mates and work together for the CIA – their desks are across from each other. Following an opening teaser in which the two manage to accomplish only part of their task [retrieving a package containing something deadly], and missing part [instead of capturing the two brothers behind the weapon’s potential sale, they kill one and the other escapes – no doubt vowing vengeance]. They also mange to loudly and explosively fail to remain covert…

Assigned desk duty [see: desks across from each other], the two deal with their punishment in differing ways: Tuck takes his son to a karate competition; FDR picks up women. Cut to Lauren [Reese Witherspoon], the boss at a consumer review business where she’s taking a blowtorch to a variety of kitchen pans before describing the results and selecting the best one.

Lauren’s best friend, the very married and equally politically incorrect Trish [Chelsea Handler] bemoans her single friend’s lack of a social life – and posts a very sexy profile on a dating website. Besides embarrassing her at work, the profile gets Lauren a call from Tuck – whom FDR offers to extract if their first meeting goes wrong.

Things go well, but Lauren runs in FDR in a video store around the corner and, before you know it, she’s dating both men – we learn pretty early that they’re seeing the same woman and establish some ground rules that we all know will be ignored shortly. The rest of the film is the battle of wits – and resources – between the two as they try to outdo each other with Lauren – to whom they’ve both become very attached. Somehow, you just know that when she chooses, the surviving brother from the teaser will come along and disrupt things in the worst possible way.

Unfortunately for the film, there are no great lines and it quickly becomes a live-action cartoon. There are several familiar scenes [three people moving around in an apartment in which none of them is aware of the other two; a car chase that ends on an uncompleted stretch of freeway; FDR and Tuck coming to blows in a restaurant while Lauren is powdering her nose in the lady’s room, and so on.

The effects are decent and the stunts are pretty well choreographed, though they don’t have the kind of frenetic originality that would make them stand out from dozens of other action movies.

Pine plays against his wholesomely boyish good looks as the playa who falls in love, while Hardy plays against type as the wholesome, divorced father who loves his son, Joe, and maybe falls for Lauren because she wins the boy over.

Witherspoon doesn’t actually have to do much to come across as a single hottie. She’s always been cute as a button, but there’s always been a great deal of sex appeal behind the cuteness. As Lauren, she just lets it move into the foreground.

Somehow, despite This Means War being less than the sum of its parts – and it could’ve used an actual actor as Trish – I found myself laughing at the appropriate places for the most, and only at inappropriate moments occasionally. Perhaps it’s because McG directs with such a wacky energy that the film feels like a Warner Brothers cartoon at times.

Anyroad, I enjoyed it enough to give it a very marginal thumbs up.