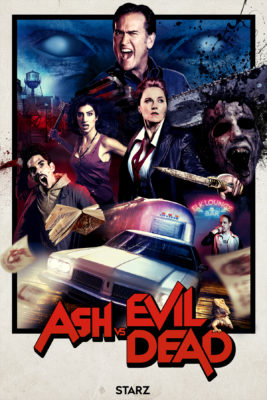 Beverly Hills, Calif., July 19, 2016 – Today, STARZ released a new “Ash vs Evil Dead” red band trailer that was deemed too gory for San Diego Comic-Con International.  Musician and super fan of the series, Kid Cudi, premiered the trailer via twitter (@KidCudi). STARZ also revealed a never before seen poster for the series created especially for Comic-Con International. The poster will be available at the “Ash vs Evil Dead” cabin in Petco Park Interactive Zone to be signed by cast members and executive producers on the series.

“Ash vs Evil Dead,” a 10-episode half-hour series, is the long-awaited follow-up to the classic horror film, The Evil Dead.

The second season roars back into action with Ash leaving his beloved Jacksonville and returning to his hometown of Elk Grove, Michigan. There, he confronts Ruby. The former enemies have to form an uneasy alliance as Elk Grove soon becomes the nucleus of evil.

Watch “Ash vs Evil Dead” Season One: The full first season of “Ash vs Evil Dead” can be viewed now on the Starz App on Chromecast, Apple TV (4th generation and newer), iPhones and iPads running iOS 7.0 or higher, Google Nexus Player, Sony Android TV, Roku as well as most Android phones, tablets, and TV devices.

Join the conversation with: #AshvsEvilDead